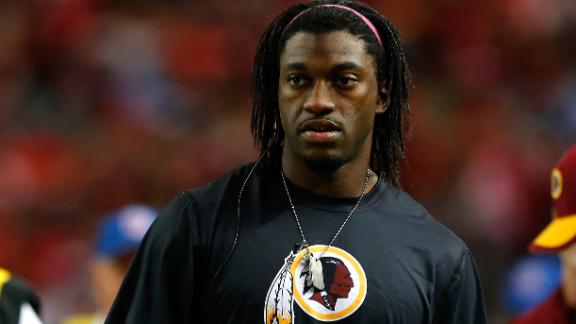 ASHBURN, Va. -- The Washington Redskins have releasedRobert Griffin III, the 2012 NFL offensive rookie of the year and onetime face of the franchise, the quarterback confirmed via an Instagram post and team later announced.

The move, first reported by ESPN's Dianna Russini, was long expected, but still represents quite a change from four years ago when Griffin was one of the most dynamic players in the NFL and the hope of a starved fan base.

Griffin had lost the starting job in August and served as Washington's No. 3 quarterback all season. He was active for one game.

Had Washington kept him on the roster after 4 p.m. on March 9, his $16.15 million for 2016 would have taken effect and counted against the team's salary cap. By releasing him now, the team avoids having any of that money count toward the cap. The Redskins had been holding on to Griffin in the hopes that another team might trade for him.

Also Monday, the Redskins released defensive end Jason Hatcher, potentially saving the team $6.8 million in salary cap space if they use a post-June 1 designation. Hatcher was scheduled to count $8.7 million vs. the cap.

The defensive end had contemplated retirement, but coach Jay Gruden said at the combine that, based on a conversation the two had earlier, Gruden thought Hatcher would continue playing. The Redskins had said they wanted him back, but he would need to take a pay cut. Hatcher played for Washington the past two seasons, starting at right end. Hatcher, who turns 34 in July, spent his first eight seasons with Dallas.

Griffin's release ends one of the more dramatic and emotional periods in Redskins history. Washington traded up in the 2012 draft, giving up two first-round and one second-round pick and swapping first-rounders with St. Louis. With the No. 2 overall pick, the Redskins selected a player who quickly became a fan favorite. He was dynamic -- able to both throw and run -- and a household name because he had won the Heisman Trophy four months before the draft. He even had national endorsements and a catchy nickname: RG III.

Early on, Griffin certainly looked as if he would fulfill expectations. In his first NFL game, the Redskins unveiled their zone-read option game and Griffin starred, throwing for 320 yards and two touchdowns and running for an additional 42 yards. Griffin struggled in some games as a rookie and coaches would say he had a ways to go as a passer, mostly because he came from a spread offense at Baylor that was unlike anything he had to learn in the NFL.

But there was no hint of future discord that season.

At one point, then-coach Mike Shanahan told reporters, "I don't think anybody in the history of the league has played at his level. At least over the last 40 years, when I take a look at the numbers and what he has done, I don't think anybody has played at his level. As we've talked about before, he's got a unique skill set -- his ability to throw, drop back, play action, put a threat on a defense with his running ability -- and he will just get better and better. He's just scratching the surface. And the reason I say that is because he works at it."

Griffin set an NFL record for rookies with a 102.4 passer rating en route to winning the league's offensive rookie of the year award. He threw for 3,200 yards, 20 touchdowns and five interceptions and ran for another 815 yards. He was a key factor in the Redskins winning seven straight games to close the regular season en route to an NFC East title.

But he began having problems late in the 2012 season, stemming from his first knee injury. Griffin partially tore the posterior cruciate ligament in his right knee while scrambling in a Dec. 9 game against Baltimore. Griffin sat out one game, but returned for the final two of the regular season. After that game, distrust started to build, mostly related to Griffin's displeasure at continuing to run the zone read. However, the coaches always felt this strategy protected him more than just having him sit in the pocket and throw.

Griffin's knee issues weren't over. In the first round of the playoffs against Seattle, Griffin helped the Redskins to a 14-0 lead, but he tweaked his knee on one scramble around the end. Shanahan debated taking him out and later said that after consulting with Dr. James Andrews and Griffin himself, he left the quarterback in the game.

But in the fourth quarter, Griffin tore the ACL in his right knee. That led to an offseason in which the friction between Griffin and the Shanahans, including Mike's son, offensive coordinator Kyle Shanahan, started to become public.

Still, Griffin was the future of the franchise and vowed to return for the season opener -- "All-In for Week One" was the slogan. During camp, the Redskins were taking it slow -- and Griffin wasn't cleared to play in preseason games -- so Griffin dubbed that stretch "Operation Patience." He made it back in time to start the opener; however, his game never returned to 2012 levels.

In 2013, Griffin started and played the first 13 games. In that time, he threw 16 touchdowns to 12 interceptions and finished with an 82.2 passer rating. He was sacked 24 times in his last five starts and Mike Shanahan shut him down, wanting him to reach the postseason healthy.

But in the offseason, Shanahan was replaced by Gruden, who was ostensibly hired to fix Griffin. It didn't help Griffin's game. He struggled in training camp and in the 2014 season, with four touchdowns and six interceptions in seven games. Griffin missed six games because of a dislocated ankle suffered in Week 2. He was later benched for three games, only to return midway through the third when Colt McCoy injured his neck. Griffin then started the final two games of the season.

At the scouting combine last year, Gruden announced that Griffin was the starter entering the 2015 season. Although coaches spoke positively about him throughout the offseason and even in camp, Griffin did not show the progress they wanted. He suffered a concussion in the second preseason game, which enabled them to turn to Kirk Cousins, bumping Griffin to the No. 3 role. That's where he stayed all season.

Griffin declined all interviews this season -- the team didn't want him talking to the media. The day after the 2015 season ended, Griffin cleaned out his locker, taking with him his action figures and some printouts of sayings he had taped to his locker. But he left one behind, an inspirational text that, in essence, said to ignore the critics and closed with, "In the final analysis, its [sic] between you and God. IT WAS NEVER BETWEEN YOU AND THEM ANYWAY."

By all accounts, Griffin handled this past season well, staying out of the spotlight.

"Obviously, he wasn't happy," Gruden said late in the season. "He's a great competitor. He accomplished some great things in 2012, he really did, but he handled it like a pro. In the long run, hopefully it'll make him a better quarterback. I know he grew a lot being a third-string quarterback here -- different system, different terminology, things that were new to him. I think the skill set that he has and he learned from [Mike] Shanahan, the new stuff that he learned from us, I think will make him a better quarterback wherever he goes -- however it works out for him."