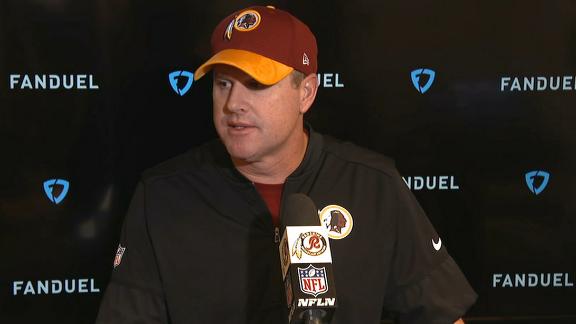 GLENDALE, Ariz. -- The Washington Redskins got kicked in the gut by the Arizona Cardinals during the game and chewed out by their own coach afterward.

Redskins coach Jay Gruden scolded his players after Sunday's 31-23 loss, his voice carrying through the walls of the locker room. Washington has lost two in a row and fallen behind the Tampa Bay Buccaneers for the sixth and final playoff spot.

"This is the hottest I've ever seen him," Redskins defensive end Chris Baker said. "He has every right to be as mad as he is because we're too good for this. If we want to get to that next step and have another chance to get to the playoffs, we have to handle our business."

Gruden was upset with how the Redskins started the game. For the second consecutive game, the defense allowed the opposition to drive for an opening touchdown. On Sunday, the Cardinals marched 75 yards in 15 plays.

When the offense had a chance to respond, it gained 9 yards on first down -- followed by consecutive false-start penalties and a 10-yard sack on third down.

It was the same message players said he delivered to them.

"You can't come out flat like that," Baker said.

Redskins cornerbackJosh Norman said it was "probably" the most angry he's seen Gruden.

"He believes a lot in us," Norman said. "We just have to execute better. It's on us to do that."

Gruden also was upset about a third-quarter sack/fumble that the Cardinals returned to the Redskins' 10-yard line. Arizonascored three plays later to take a 17-13 lead. It followed a Redskinsdefensive stop that led to a missed 53-yard field goal by the Cards.

"It sucked," Redskins linebacker Will Compton said. "That was one of the moments Coach Gruden was pissed about. We have a huge stop and push them back, and we have a chance to take control of the momentum of the game. It's frustrating."

Gruden often shows his emotions, especially after tough losses, when he looks spent. There have been times after a loss, though, when he has walked around the locker room thanking players for their effort -- as he once did two years ago. He is an upbeat coach known among his players for treating them well.

But Sunday wasn't the time for pep talks, which is why he looked more angry than drained. He wants to shelve any postseason talk, knowing that with four games left the Redskins have lost their ability to control their situation.

"There's no talk of playoffs over here," Gruden said. "We're trying to win the next game. We're not even close to thinking about the playoffs right now."

But he is thinking about what must happen to snap this two-game losing streak, his team's longest since the opening two weeks of the season. And it goes back to how they started Sunday.

"I don't know," Gruden said. "Get to the bottom of it and find out. Maybe we're not eating the right food for the pregame meal. I don't know."