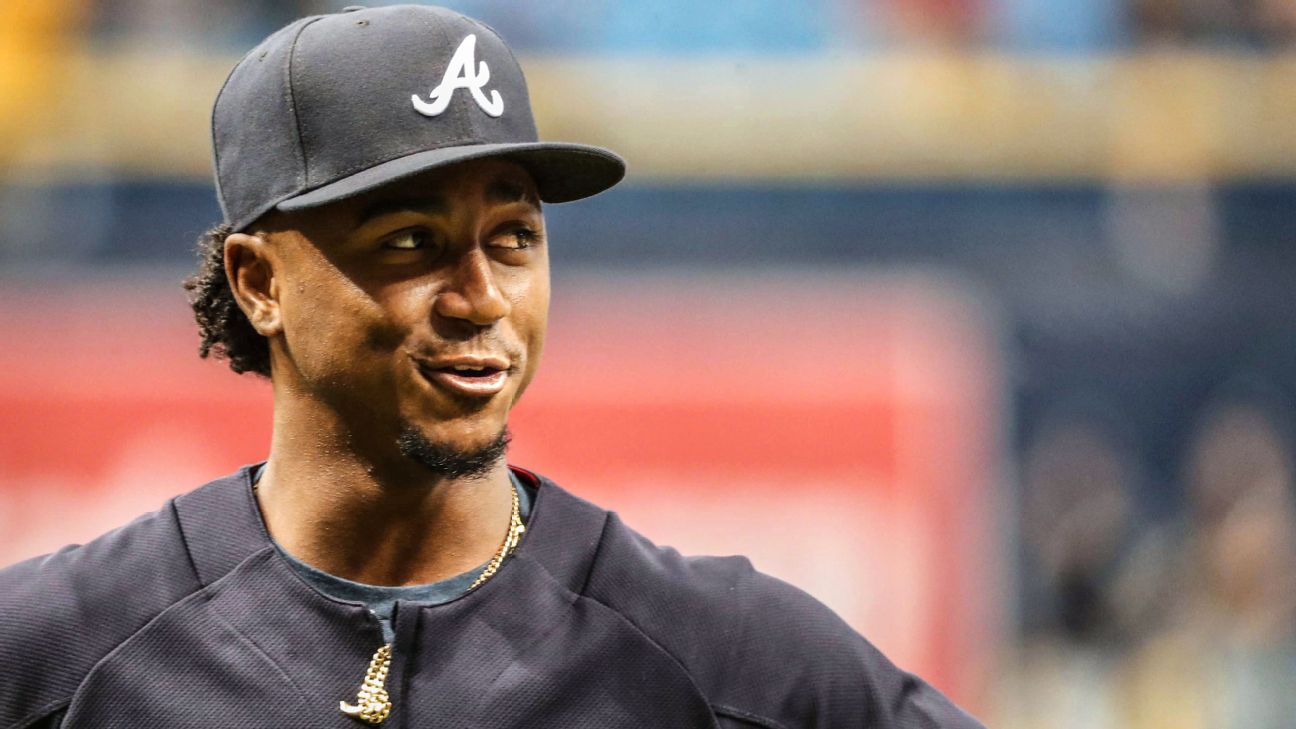 The Atlanta Braves beat the Philadelphia Phillies3-1 and all Ozzie Albies did was go 2-for-4, homer, walk and score all three runs. The home run came in the third inning off a first-pitch curveball from Vince Velasquez:

That's 14 home runs for Albies, ending a six-game homerless streak. Albies is now hitting .395 and slugging .791 in 43 at-bats when he puts the first pitch in play. Pitchers may want to reconsider their approach against him since he leads the majors in first pitches in play (seven more than anybody else and only 10 guys have at least 30 in play).

Meanwhile, Gleyber Torres homered again for theNew York Yankees in their loss to the Texas Rangers.That's now seven home runs for him -- all this month -- and he's up to .330/.394/.602 in his first 26 games in the majors.

So the question of the moment: Which young second baseman do you like the most? You know, if you had to choose one or your dog would run away, or if you're starting a team from scratch and can pick only one, or just because it's a fun question to contemplate. Torres is just 25 days older, so we're talking two 21-year-olds who are going to make a lot of All-Star teams in their careers.

Since I love my dogs, I'll make a choice and go with Torres. Two things I like from him so far: He has a little more patient approach than Albies and I think that eventually turns into higher OBPs, and his defense looks great at second base (plus-5 defensive runs saved already). When I was in Yankee camp in spring training, the team raved about his hands and instincts on defense, plus his arm strength. He can play shortstop, and he's at second base only because the Yankees have Didi Gregorius, but Torres could eventually end up back at shortstop. For now, we have a great debate brewing. Who do you have?

No Judge in Home Run Derby: To nobody's surprise, Aaron Judge said he won't participate in the Home Run Derby at the All-Star Game. While Judge's reasoning was a simple "There is no need to do it," there is likely another reason. I think back to when Judge first reported to spring training and talked about his offseason surgery to clean up some cartilage in his left shoulder. Asked when the shoulder started bothering him, Judge answered only after a long pause: "I felt it midway through the season last year," he finally said.

Judge chooses his words carefully, and while he didn't specifically say he hurt the shoulder during the Home Run Derby, the timing of the injury left everyone to speculate if that's when the injury happened. Judge slumped through the rest of July and August before going on another tear in September. So, as he said, he'll be "One and done, Home Run Derby champion." It's a blow for baseball, as the Derby is one event that brings in casual fans (especially kids) and now one of the sport's biggest sluggers won't be there. But given what may or may not have happened last year, his decision is understandable.

Brewers' bullpen lights out as Diamondbacks continue to sink: TheMilwaukee Brewerslead the majors with a 2.53 bullpen ERA and the pen did the job again in a 1-0 win over theArizona Diamondbacks, throwing four scoreless in relief of Jhoulys Chacin. With Corey Knebel back for the ninth inning, that frees manager Craig Counsell to use Josh Hader as the leverage demands, and Hader tossed two innings in this game. He got help from a great double play from Lorenzo Cain:

The Diamondbacks continue to struggle at the plate, as they lost their sixth game in a row and for the 12th time in 13 games. They've scored more than two runs just three times in those 13 games. With just three hits, their team average dipped to .215. Paul Goldschmidt fanned three times -- including looking in the ninth as he flinched at a big Knebel bender -- as his average dipped under .200. I have nothing to say here except this makes me sad since the Diamondbacks were 24-11 two weeks ago and are now 25-23.

The name is Franchy, not Frenchy:San Diego Padresrookie outfielder Franchy Cordero is an intriguing player because of enormous raw power that allows him to crank 449-foot home runs like this one:

That was Cordero's seventh home run, and his average distance on home runs at the start of the night was 446 feet -- the highest-average distance among players with at least five home runs. In other words, when he connects, the balls travels deep into the night.

Cordero not only has power, but he's one of the fastest players in the game. Despite those tools, he was just Keith Law's No. 25 prospect heading into the season -- 25th on the Padres, that is. The knocks against Cordero: poor baseball instincts, poor strike zone judgment, concerns about the hit tool. "He's probably an extra guy in the end," Keith wrote, "but it's worth giving him some time the next two seasons to see if he can be selective enough to let the plus power play."

Cordero began the season in the minors, but injuries to Wil Myers and Manuel Margot have given him the opportunity, so this playing time hasn't necessarily been by design for the Padres. Cordero has shown improvement from a rough 30-game debut in 2017:

That's still a lot of strikeouts and not enough walks to offset all the strikeouts, but he's been respectable with a .252/.319/.466 line. Sure, maybe he does wind up as a backup outfielder in the long run, but it will be fun to see if he can become something more than that.

Welcome to the big leagues, kid: Willy Adames, Keith Law's No. 20 overall prospect heading into the season, made his debut for theTampa Bay Rays, and his second at-bat did this off Chris Sale:

Adames was hitting .311/.387/.466 for Triple-A Durham and has a chance to be pretty special. The Rays are desperate to produce a homegrown offensive star. The Evan Longoria/Carl Crawford/Ben Zobrist era now seems like ages ago, and their best player in recent seasons has been Kevin Kiermaier, and that's because of his glove, not his stick. Here's hoping Adames turns into the real deal -- and adds to that amazing depth at shortstop in the American League.

(Alas, Sale was too tough, fanning nine in 7 innings and lowering his ERA to 2.17, and the amazing Mookie Betts hit a three-run homer to take over the MLB lead with 16.)

Quote of the day:The Cleveland Indians beat the Chicago Cubs 10-1. Jose Ramirez hit his 14th home run. I love this:

Finally ... Gerrit Cole is married to Brandon Crawford's sister and did this to his brother-in-law: Cole got the last laugh, however, as the Astros won 11-2 and he fanned eight in six innings. So who buys dinner after this one?