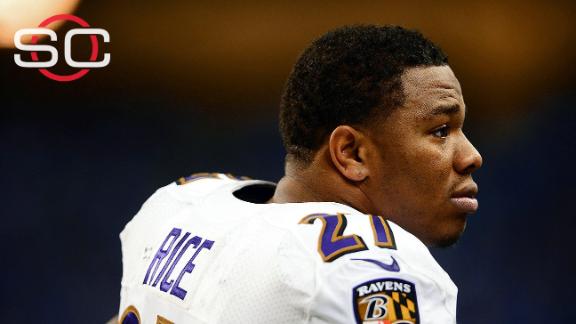 The co-founders of A Call To Men, a national organization that encourages men to end violence against women, are advocating that former Ravens running back Ray Rice be given a second chance in the NFL.

Tony Porter and Ted Bunch, co-founders of A Call To Men, each of whom has worked with Rice since November, believe that Rice deserves an opportunity to be an NFL running back again.

"We have been around a lot of abusive men, but our experience with Ray has been tremendously positive," Porter said this past weekend. "We feel strongly about him having the opportunity of having a second chance. He's deserving of it."

Porter and Bunch said they've based their beliefs on their extensive involvement and interaction with Rice over the past nine months. They have watched him speak at his alma mater, Rutgers, and work with student-athletes at his high school in New Rochelle, New York, delivering a message about learning from your mistakes and changing the narrative of your life.

They say he wants his daughter, Rayven, to remember him for the good he did for years rather than the night he punched his then-fiance, Janay, in an Atlantic City hotel elevator. (The two later married.)

"He's held himself accountable," Bunch said. "He is saying everything that you would want him to say and doing everything that you would want him to do. So why wouldn't he deserve another chance? His work in the area of educating young men is more important than him getting back on the field. He knows that and has said that to us. He is seeing the bigger picture. He has a desire to compete again, but also to make a difference in the world. This is what mistakes should be about: learning from them and teaching others. We've been in front of a lot of batterers. He is as transparent as I've seen, and as sincere as I've seen."

To date, teams privately have discussed the idea of bringing in Rice, but no one has actually done it. His performance in 2013, in which he averaged just 3.1 yards per carry, may be another reason for that. But that also happened to be the season in which Rice played through a significant hip injury that required a medical procedure after the season and in which Baltimore's offensive line also struggled. One Ravens executive even remarked that last summer Rice looked like the Pro Bowl running back he once was before the national controversy erupted.

Now, with Rice's hip healed and his mindset different, Porter thinks the time has come for Rice to resume his career.

"We'll catch flak for this," Porter said. "A lot of people think we should kick him to the curb and his name should be mud forever. But how great would it be if everyone who made a mistake made it their mission to make sure a million people don't make the same mistake? To use the influence that he has, what a great way to correct that wrong. And that's what Ray has committed himself to doing. His intentions are real, his heart is pure, and we're going to help him to move forward so he can have a positive impact on the next generation of manhood."

Anti-violence group endorsing Ray Rice for second chance
Adam Schefter discusses the co-founders of A Call To Men, a national organization that encourages men to end violence against women, advocating that former Ravens running back Ray Rice be given a second chance in the NFL.