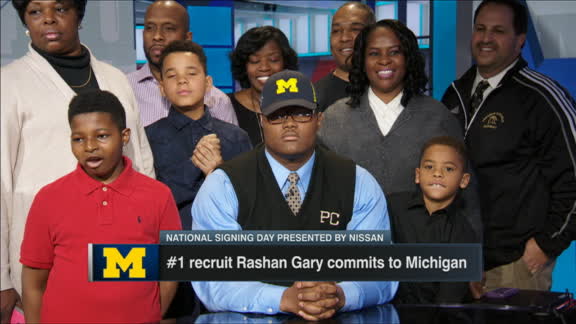 BRISTOL, Conn. -- Rashan Gary, the No. 1 ranked prospect overall, has committed to Michigan.

The coveted defensive tackle from Paramus Catholic (Paramus, New Jersey) chose Michigan over Clemson and had offers from many major programs in the country.

"It was very close," he said. "Those are schools that I love, and it was very hard to pick between them, but I felt like I did what was best for me."

Gary said he will fax in his letter of intent to Michigan when he gets back to New Jersey, as his school is having a ceremony for all the football players signing and he wants to do so along with his teammates.

Michigan's landing the 6-foot-4, 287-pound prospect gives the Big Ten its first No. 1-ranked signee since ESPN started its rankings in 2006. It also gives Michigan its highest-ranked commitment. The next-highest was Jabrill Peppers, who was ranked No. 2 overall in the 2014 class.

The Michigan staff worked diligently to fend off pushes from Clemson, USC, Alabama, Auburn and Ole Miss throughout the process, and the relationships Gary and his mother built with the staff paid off in the end.

Academics and the surrounding environment were important aspects in his decision, and despite feeling that a few schools were similar in certain categories, he said that Michigan ultimately made him feel the most comfortable.

Part of that comfort level had to do with Michigan's success in recruiting Gary's home state. Five of the eight ESPN 300 prospects from New Jersey chose the Wolverines.

"I've been there three times and the rest of the schools I've only been there two times," he said. "I'm happy, my mom is happy and my family is happy."

No. 1 recruit Rashan Gary's on his way to Ann Arbor
Rashan Gary, the No. 1 recruit on the ESPN 300, announces his intent to play college football at Michigan.

Jim Harbaugh lands the big prize
David Pollack, Mack Brown and Tom Luginbill analyze the immediate impact Rashan Gary, the No. 1 recruit on the ESPN 300, will have for Michigan's defense.