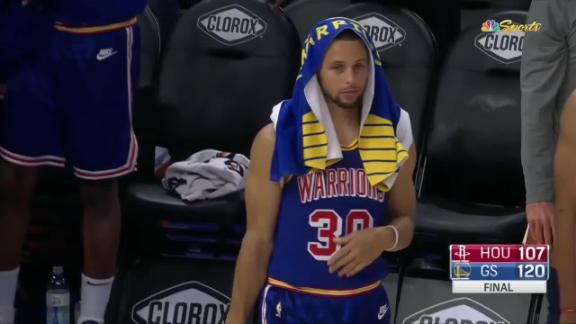 SAN FRANCISCO -- - Jordan Poole scored 15 of his 25 points in the first quarter and the Golden State Warriors beat the Houston Rockets 120-107 on Sunday night.

Poole also had five assists and four rebounds, shooting 7 of 13 from the field and 9 for 9 from the free throw line.


"He had some openings and he attacked and just did a nice job recognizing driving lanes," Warriors coach Steve Kerr said. "I thought Jordan played really well."

Added Poole: "I was just playing my game, my normal game, attacking the rack the same. Apparently, we got a good whistle today."

Stephen Curry added 20 points and three steals to help the NBA-leading Warriors improve to 8-1 with their fourth victory in a row. Andrew Wiggins scored 16 points, and Draymond Green had six points, eight rebounds and nine assists.

Jae'Sean Tate led Houston with 21 points and 10 rebounds, and Daniel Theis had 14. The Rockets have lost eight straight and are tied with New Orleans at an NBA-worst 1-9.

"We've just got to stay together," Theis said. "It's a long season. We can't start questioning things now and put our heads down. The season is too long."

Leading just 83-80, Golden State used a 15-0 run to open an 18-point lead late in the third quarter. Houston never got back within single digits.


"Our third quarters just have to be better," Tate said. "We know teams are going to go on runs. It's part of the game. But we've just got to figure it out."

Otto Porter Jr. made three straight 3-pointers in a 40-second span late in the second quarter, sending the home crowd into a frenzy. Porter's personal 9-0 run stretched the Warriors' lead from one to 10. He had 15 points and nine rebounds in 18 minutes. "We got some stops, some key turnovers, some steals that led to offense," Porter said. "We're big on defense creates offense, so I was able to get a few looks and knock it down."

Rockets: G Kevin Porter Jr. left the game with a left thigh contusion, finishing with 11 points and seven assists in 27 minutes. ... G Eric Gordon sat out with right groin tightness after scoring 12 points in Saturday's loss to Denver. ... F Danuel House Jr. missed his sixth straight game with a sprained right foot but is expected to return as soon as Wednesday.


Warriors: Swingman Andre Iguodala missed the game with left hip soreness. "If he's banged up at all, back-to-back or we've got a string of games, we're going to try to find him some rest when we can," Kerr said. "He said he's sore but shouldn't be anything long term." ... F Jonathan Kuminga was recalled from G-League Santa Cruz.