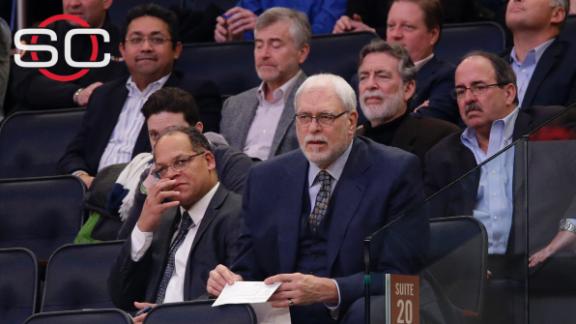 "Chasing a point guard, where it becomes just an obsession, isn't necessary. It's not necessary. We can play the game without that," Jackson said Friday at Staples Center.

Jackson pointed to the success that the Chicago Bulls and the Los Angeles Lakers had running the triangle; neither franchise relied on a ball-dominant point guard during his tenures as coach.

"We went to a two-guard format, and I think we were successful at it," he said. "I think we caught a lot of people in the league by surprise because of the way we played. So it works, and we know it works."

The Knicks will have at least $18 million to spend in free agency this summer. If Jackson's statements Friday hold true, it seems unlikely they will chase an elite free-agent point guard such as Mike Conley or Rajon Rondo. (It's worth noting that Rondo said last month that he's unlikely to consider the Knicks in free agency because of the triangle.)

Jackson noted that the Knicks will try to develop their guards from within. He mentioned Tony Wroten, whom they expect to sign in the coming days, as one player who could add depth at the position.

"Our process is going on [and] it's a little underground, a little beneath the surface, but this is one of our desires, that we have to have a penetrator and we have to have somebody that can handle those roles," he said.

Jackson also said interim coach Kurt Rambis is "perfectly capable" of coaching the team permanently. He noted that Rambis' record as head coach of the Minnesota Timberwolves (32-132) puts a "black mark on his coaching ability at first sight." But he added that Rambis, with whom he has a close relationship, has "a way of handling players. He's relaxed but he has the ability to keep them focused on the important parts of it."

Jackson said part of his evaluation of Rambis will be based on how the Knicks finish the season. The club is 4-8 since Rambis took over for the fired Derek Fisher last month. The team is 27-39 overall.

Jackson also addressed his future with the Knicks

There had been some speculation that he could leave New York before the end of his five-year contract. Jackson's deal, according to ESPN's Chris Broussard, contains an opt-out clause after the 2016-17 season. But the team president said he's fully committed to the Knicks and fulfilling his contract.

"Well, I'm in L.A. right now [and] I'm enjoying it," Jackson said with a smile. "But this is another part of my life. The energy that I have is directed toward turning this team around, and it's taken my full effort so far. It's been a challenge and I'm still in it and I'm in it to win it, so to speak."

Jackson revealed that he recently spoke to star forward Carmelo Anthony about the future of the franchise. Jackson said he believes Anthony, 31, is committed to New York, which is something the All-Star himself has said recently.

"He sees the potential that we have," Jackson said. "He had questions about where we're going. So we discussed it."

Of prized rookie Kristaps Porzingis, Jackson said, "Our phenom, our kid that has surprised everybody, hit the wall and it's been tough for him in the process."

Porzingis has been productive lately, but his numbers have dipped some from the first half of the season. He started the year with 18 double-doubles but hasn't recorded one in a month.