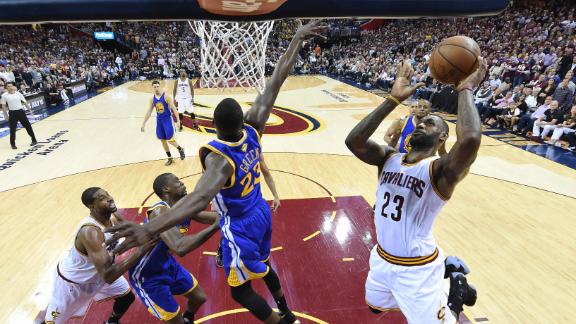 A tongue-lashing from an unlikely source reportedly helped to motivate the Cleveland Cavaliers, who rebounded from a demoralizing Game 2 defeat to thrash the Golden State Warriors in Game 3 of the NBA Finals.

With Cavaliers players moping in the locker room, Handy admonished them for failing to perform on the national stage and questioned their toughness, the website reported.

"He's an Oakland boy, and we went out to Oakland and got our ass whipped twice," Cavs forwardRichard Jefferson told the website. "He was pissed off. He has to show up there every day. It means a lot to him, it means a lot to us, and for us to go out there and play the way we did was embarrassing.

"Look, we personally feel that no team should handle us the way they did the last two games, and it was disrespectful."

Cavaliers players told Cleveland.com that Handy's stern message resonated with them up to Game 3, when they responded with a 120-99 victory that cut their Finals deficit to 2-1.

Channing Frye told the website that "sometimes you need somebody to remind you of who you are."

Jefferson told the website that it "wasn't normal" for Handy to lay into the team"but sometimes people step out of their norm and say what they feel needs to be said, and it was definitely something that needed to be said."

Cavaliers head coach Tyronn Lue said Thursday that Handy's message to the team was one that needed to be delivered.

"Something we all knew, that we had to play harder. Just had to continue to compete for 48 minutes, not one quarter, not a quarter-and-a-half. What he said was right on," Lue said. "The guys accepted that, they understood it and we just moved on."