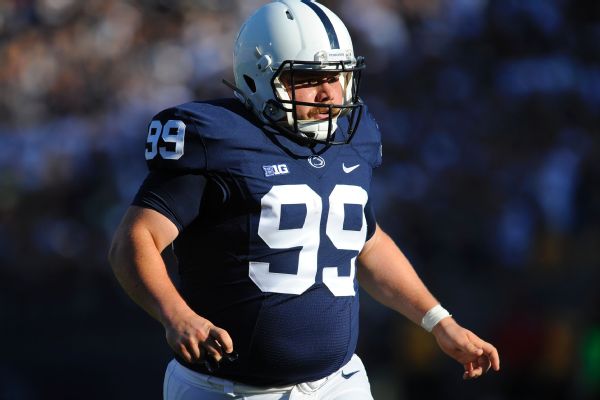 Julius -- whose big hits on kickoffs twice went viral this season -- missed both spring and summer workouts with the football team. The reason was initially unknown, but he explained on Facebook that he was admitted to an eating disorder center in St. Louis from May 9 to July 26.

"Due to my increase in not only weight but also depression and anxiety, my team physicians started to notice not only a change in my overall happiness but also my performance as a normal human being," Julius wrote. "Throughout this whole process I learned a lot about myself. I learned that for the last 11 years of my life, I have suffered through a disorder known as binge eating disorder."

Julius, a 258-pound redshirt sophomore did not explain why he decided to open up about his disorder now, but he thanked both Penn State coach James Franklin and the staff for their support. He also extended his own help to anyone in a similar situation.

"If anyone - and I mean anyone, guy or girl - is struggling with the same or anything similar, please message me as I will be in immediate contact to help in any way I can to provide information or insight on my struggles," he wrote. "And I would love to help."

The reaction to Julius' statement has been overwhelmingly positive so far, with more than 200 friends and fans posting to Julius' Facebook wall and thanking him for the courage to reveal his disorder. His Twitter account has been flooded with similar messages.

"We are very proud of Joe and fully support him as he deals with these personal matters," he said. "However, as is our policy, we do not discuss the medical affairs of our student-athletes. We ask for others to be supportive and respectful, as well!"

Julius has made headlines this season for his big hits on Kent State returner Kavious Price and Michigan returner Jourdan Lewis. All-American Jabrill Peppers even moved out of the way to avoid blocking the kicker.

"That guy is surprisingly a very good cover guy," Wolverines special-teams coach Jay Harbaugh said. "Credit to him -- he's a big, stout cover guy you really have to account for, which is unfortunate. You usually like to be able to ignore the kickers."