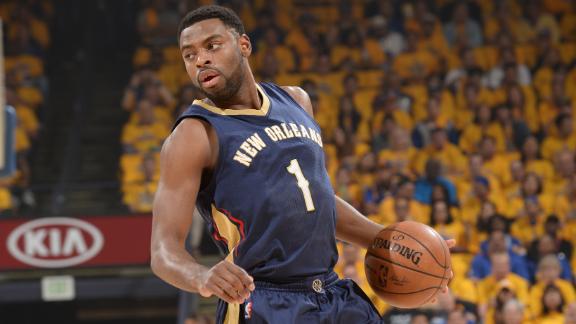 OAKLAND, Calif. -- The New Orleans Pelicans have listed Tyreke Evans as questionable for Game 2 of their first-round series against the Golden State Warriorson Monday night with a bone bruise in his left knee.

Evans addressed reporters Sunday before the Pelicans' practice at the University of San Francisco and was optimistic, describing himself as a game-time decision despite the fact that he was planning to do very little at the practice session beyond receiving treatment.


"The doctor wants me to stay off of it and see how I feel tomorrow," Evans said. "If you can't run full-speed against this team, you don't want to be out there."


Evans arrived for Sunday's workout in full practice gear and said he feels "better" after initially saying postgame Saturday that he "felt a little pop" after banging knees with Iguodala.


The resulting contusion knocked Evans out of Game 1, robbing the Pelicans of their second-leading scoring at a time when former All-Star guard Jrue Holiday is already on a minutes restriction after missing 41 games this season because of a shin injury. On Monday, Holiday was listed as questionable for Game 2 due to soreness in his lower leg.


Holiday logged 21 minutes off the bench in Saturday's 106-99 Game 1 loss to the Warriors.