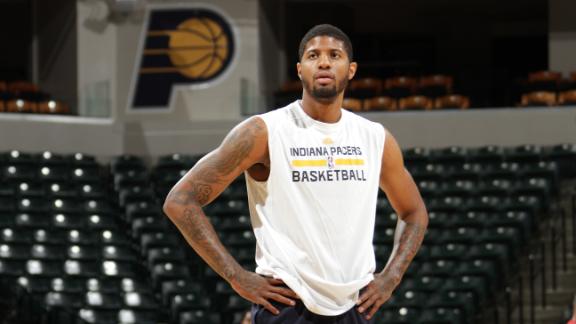 Paul George spent time Friday afternoon taking care of business in New York City, but getting back on the court was on his mind.

"There's no exact timetable for my return," George told ESPN.com from Jay Z's 40/40 Club, where he had a public design session with New Era Cap to finalize his new logo and work on a collection of hats for the company. "I have targeted March 1 as the date that I would go 100 percent in practice, and if everything felt good, I'd give myself another two weeks to get in shape to play in a game."

George said he still has a long way to go but "the best part is feeling like a basketball player again."

"The biggest fear I have is injuring my [left] healthy leg because I'm so used to it being the stronger one and I don't want to overcompensate for it," George said. "I got a rod in my other one, so that's stronger than it was before."

George broke his right leg in a gruesome injury in the fourth quarter of a Team USA scrimmage Aug. 1 in Las Vegas. Doctors who did not personally examine George originally told the media that the recovery time was between 12 and 18 months.

George will look different when he comes back.

Last year, he filed with the league to change his jersey number from 24 to 13 so he could take on the nickname "PG-13."

"Coming into training camp, it was cool to see my name with another number, even though I wasn't able to play in it," George said. "I'm excited to step onto the court with it and begin to own that number."

Despite making the league's deadline for number changes so that he wouldn't have to buy up all his old product, George did it anyway and donated a slew of No. 24 items to local children.

"It was a good way to give back to the community," said George, who couldn't remember the specific cost but said it was five figures. "People still talk to me about it today."

The "PG-13" logo, made by George with New Era designer Shawn Curtin, was finalized Friday afternoon with the No. 13 inside the letters P and G. A cap with the logo will be sold in the late summer.