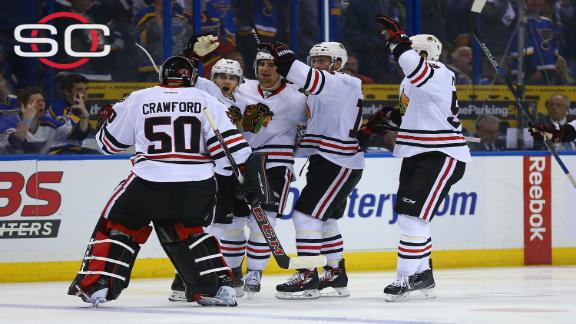 ST. LOUIS -- The Chicago Blackhawks finally got a goal from one of their top stars. Patrick Kane's first of the playoffs saved the defending Stanley Cup champions' season.

Kane scored on a backhander early in the second overtime, and the Blackhawks avoided first-round elimination with a 4-3 victory over the St. Louis Blues early Friday.

"We've played in a lot of overtimes with this team and had some long stretches here in playoff runs, so when you get those opportunities, sometimes you come up big," Kane said. "Sometimes you get lucky, too."

Kane's fifth career overtime playoff goal, tied for third on the career list, was his first of the series, and fellow standout Jonathan Toews still has none. Both assisted on Artemi Panarin's goal in the final second of the second period for a 3-1 lead.

"I don't think I was very good in that first overtime or very good at all tonight," Kane said. "It's one of those things I tried to tell myself just to get confidence going into that fifth period and try to make some plays."

Kane, who led the NHL in scoring with 106 points, circled the net to corral his own shot that slowly slid wide, and poked it past Brian Elliott at 3:07 to send a standing-room crowd of 19,956 home unhappy.

"I tried to make a move around a guy who was maybe trying to block my shot," Kane said. "Made a move, saw the puck and tried to get one on net there. Fortunately enough, it kind of squeaked out to the other side."

Elliott's stick got tangled up with defenseman Jay Bouwmeester's skate on the play, so he was late crossing the crease.

"The plane's at 3. Let's get playing," St. Louis coach Ken Hitchcock said. "We've got to find another way to make them crack."

David Backes, who got the winning goal in the Blues' 1-0 overtime victory in Game 1, tied it on a deflection that slipped past Corey Crawford with 5:10 to play. Rookie Robby Fabbri and Jaden Schwartz also scored for St. Louis.

"I thought we played one of our better games," said defenseman Alex Pietrangelo, who assisted on all three goals. "It's going to be a tough place to win. We won the last two there, though."

Marian Hossa and Artem Anisimov also scored for Chicago, which takes the series back home for Game 6 on Saturday night.

"Tough to give up another lead like that, but we didn't crack," Crawford said. "We stuck with our game and we're excited to go back home now."

Chicago won despite being outshot 46-35 and helped road teams improve to 19-15 in these playoffs.

"I don't know if that's the way we drew it up," said defenseman Duncan Keith, who led all skaters with 42 minutes of ice time. "It would have been nice to just hang on to that lead but Kaner came through."

The Blackhawks have won three of the past six Cups but also are trying to avoid first-round elimination for the third time in six seasons.

Kane and Toews were paired on the top line for Game 5, and both assisted on Panarin's seemingly back-breaking goal with 0.4 seconds left in the second period for a two-goal cushion.

The Blues are trying to end a string of three consecutive first-round playoff exits. In 2014 they had a 2-0 lead on Chicago and then lost four straight.

"I don't think our mindset changes at all," Fabbri said. "A tough one to end here, but we're going to let this one go."

Chicago stayed alive without Andrew Shaw, suspended for one game for using an anti-gay slur at the end of Game 4.

The teams combined for 11 game misconduct penalties at the finish of the Blues' 4-3 win in Game 4 on Tuesday. There were no penalties in the first period of Game 5.

Joe Sakic had eight career overtime goals, Maurice Richard had six and Glenn Andersonhad five. ... Fabbri was among the rookie leaders with 18 goals during the regular season. ... Blues DCarl Gunnarssonreturned after being out with an upper-body injury. Rookie Joel Edmundson sat after playing the first four games. ... The Blackhawks inserted David Rundblad in place of Michal Rozsival, who was minus-3. Fs Brandon Mashinter and Dale Weise also played withTomas Fleischmannout.

Blackhawks avoid elimination with 2OT win
Patrick Kane's double-overtime goal propels the Blackhawks to a 4-3 win over the Blues, extending the series to a Game 6.