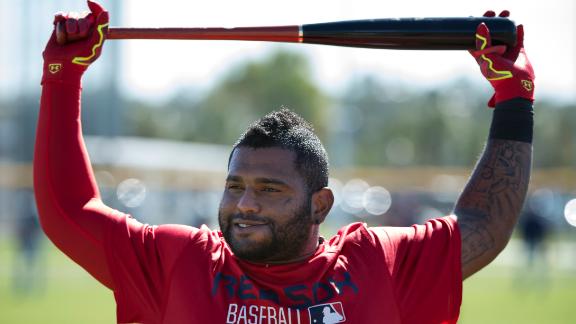 FORT MYERS, Fla. -- Red Sox third baseman Pablo Sandoval, no stranger to comments about his weight, dismissed recent social media criticism Thursday that stemmed from an unflattering portrait of him on Boston.com.

"Let them talk, talk and criticize," Sandoval, speaking in Spanish, told Marly Rivera of ESPNDeportes.com. "No matter what they say, it will never change me or the player that I am."

The photo, taken during Sandoval's first workout with the Red Sox on Tuesday -- eight days before the first official full-squad workout -- showed Sandoval, broad stomach protruding, waiting at third base for a ground ball during an infield drill.

"We live surrounded by critics, so let them talk, let them criticize me as much as they want. Ultimately that makes me a better player," Sandoval said. "What really matters is who you are when you step on the field, and I will let my bat and my glove speak for themselves. That's the only way you can shut them up.

"Critics have said that I am lazy, that I am not working hard; that picture caught me at a bad angle. But once again, let them say whatever they want to say. I will prove who I am on the field and show Boston fans how hard I am working to be a champion with this team, too."