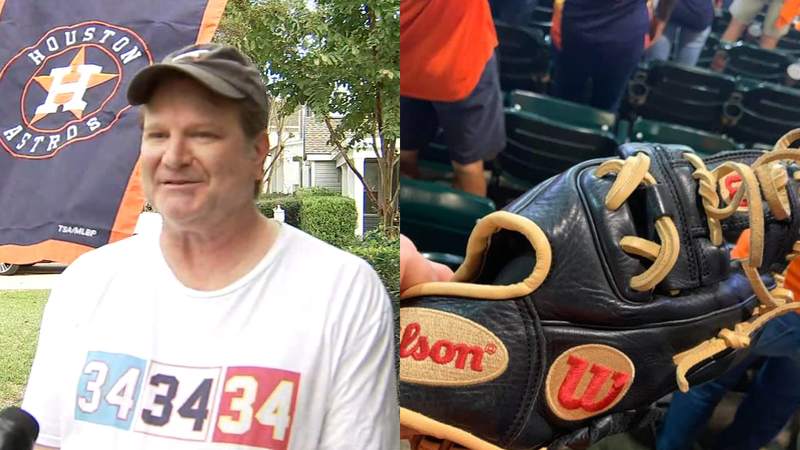 Man eager to return glove to child after ALCS game

HOUSTON, Texas (KTRK) -- In the excitement after Jose Altuve's walk-off HR Saturday night to send the Astros to the World Series, one fan might've forgotten some gear at Minute Maid Park.

Arthur Teed was at Game 6 and said a young boy, probably between the ages of 7 and 9, was showing extreme emotion throughout the night.

Teed said the young man and his family opted to leave their seats for the concourse in the ninth inning. And between innings, Teed said he noticed the young boy left his glove.

"We were kind of collectively heartbroken because, you know, the kid was such an enthusiastic participant the whole game, throwing the towel," Teed said.

RELATED: Astros stars celebrate big win with their families on the field

After asking his wife to post the glove on Facebook, Teed said he took the glove to Minute Maid Park's lost and found. He then found out the post was going viral on Facebook.

Fortunately for the young boy, they were able to contact his family. It looks like the young boy will be reunited with his glove while continuing to cheer on the Astros as they look to win the World Series.

RELATED: How the Astros match up against the Nationals going into the World Series

"It was an adorable kid, he was really enthusiastic about the game," Teed said.

While Teed said the boys parents might've been concerned about him blocking views because of the towel throwing, but he said it was all just part of the game and that he wanted to make sure the kid was reunited with his glove.
Report a correction or typo
Related topics:
sportshoustonbaseballhouston astros
Copyright © 2021 KTRK-TV. All Rights Reserved.
TOP STORIES
Judge blocks Abbott's order to pull over vehicles with migrants
Migrant advocacy groups say traffic stop order is 'detrimental'
Conroe PD sued over arrest that 'destroyed' life of former teacher
LyondellBasell survivor still in hospital 'covered in burns'
Here's when some of you could get a humidity break
Doctors see spike in children hospitalized due to COVID and RSV
Woman sentenced after arranging kidnapping of cousin killed by FBI
Show More
CDC issues new eviction ban for most of US through Oct. 3
2 more Houston lawmakers arrested in DC during voting rights protest
Bolivar Peninsula fisherman reels in 110-inch shark
Big 12 reportedly looking at Pac-12 partnership
Business is booming in Houston's East End and here's why
More TOP STORIES News