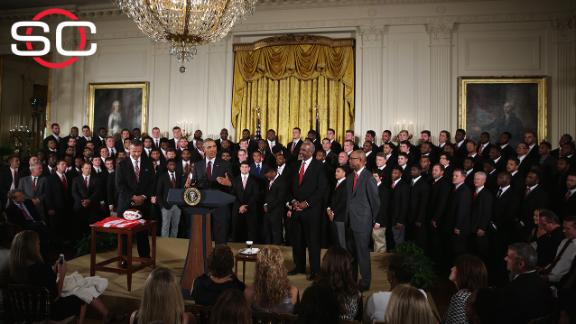 WASHINGTON -- Make room for another competitor in Ohio State'squarterback derby. President Barack Obama wants to show off his arm for the Buckeyes.


After welcoming the reigning national champion Buckeyes to the White House on Monday afternoon and praising their resilience, character and each of their three quarterbacks, Obama joked about his own arm strength before ultimately picking up a game ball and looking ready for a bit of action.

"They kept on battling back with the help of not one, not two but three quarterbacks," Obama said. "... And we learned that Cardale Jones is not your average third-string quarterback. Anybody with a nickname like '12 Gauge' has to be taken seriously.


"I told him that I could throw a football 75 yards also, but he didn't believe me. So he clearly is a smart kid."


Obama came prepared with plenty of jokes for the ceremony in the East Room, thanking crop-topped running back Ezekiel Elliott for tucking in his shirt, mimicking defensive end Joey Bosa's famous shrug pose and even referring to Ohio State rival Michiganas the "Team Up North."


He also was quick to point out his campaign promise in 2008 to bring a playoff to college football as the reason the Buckeyes were even being honored. OSU earned a spot in the inaugural College Football Playoff field before beating Alabamaand Oregonfor the national title.


"This was a historic year in college football, the country got to enjoy its first ever college football playoffs," Obama said. "And I will say it, it was about time. I cannot claim full credit, but I will point out that I pushed for a playoff system in 2008.

"I said I would throw my weight around, and PolitiFact keeps track of whether politicians keep their promises -- you're welcome America."


The Buckeyes, at least, were clearly thankful for the opportunity. And they made the most of the chance to celebrate the fact that they took advantage of it, bringing a game ball from the title game and a personalized No. 44 jersey with Obama's name on it.


After arriving in the morning, the Buckeyes toured the Martin Luther King Jr. Memorial before heading to the White House for a tour and a chance to shake hands with the president. For Ohio State coach Urban Meyer, it was his third visit as a national champion and first with the Buckeyes, which also prompted a crack from Obama since he had "only done it twice -- and for the same team both times."


After the ceremony, Meyer again thanked Obama for his support of the playoff system and indicated he would pick his brain about his upcoming quarterback battle between Braxton Miller, J.T. Barrett and Jones. But he doesn't have room for anybody else in the competition, even the president.


"He said he has a hard time hitting a golf ball 75 yards, but I don't believe that," Meyer said. "I'm going to meet with him again and ask him some questions about [the quarterbacks]. That was my fault, I forgot to ask.


"I'm glad he's a sports fan. He made the point several times, but it's true -- he jumped right in the middle of the conversation about the College Football Playoff, and we obviously benefited. This was a great day."