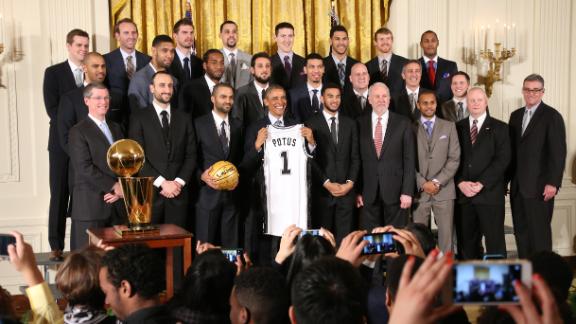 WASHINGTON -- President Barack Obama praised the sportsmanship of the San Antonio Spurs as "a great metaphor for what America should be all about."

Obama hosted the Spurs at the White House on Monday to celebrate their victory in the 2014 NBA Finals.

"Let's face it, just a little while back, people were saying that the Spurs were past their prime, not just old but kind of boring," Obama said, according to The Hill. "Now they're fresh and exciting, which is basically the exact opposite of what happens to presidents."

"For an old guy, it makes me feel good to see, you know, where's Tim?" Obama said, pointing out power forward Tim Duncan, 38.

"It makes me feel good to see that folks in advancing years can succeed in a young man's sport," Obama joked.

Obama said the Spurs have become the United Nations of basketball due to the team's diversity.

"It shows the way that this wonderful sport has become an international sport," Obama said.

Spurs center Tiago Splitter took to Twitter to thank the president for the visit.

"As somebody who's got two daughters, one of who is a baller, it makes me feel good when excellence is recognized regardless of gender," Obama said.

Obama also praised the Spurs for their public service efforts on literacy and community development in San Antonio.