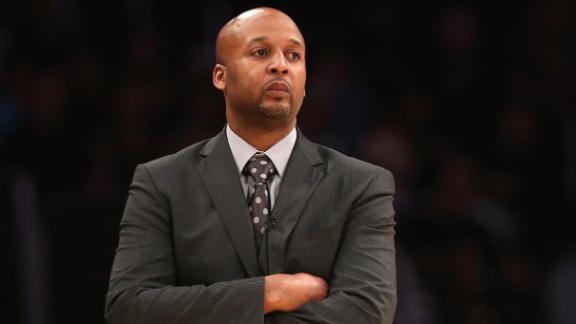 "I want to sincerely thank Brian for his time with our organization," Connelly said in a team release. "You won't find a better guy than Brian, and he is one of the brightest basketball minds I've ever been around. Unfortunately, things didn't go as we hoped, but we know with his basketball acumen that he has a very bright future ahead of him."

Melvin Hunt, one of Shaw's assistants, will serve as interim coach. In his first game with the interim tag, Danilo Gallinari scored a season-high 26 points asDenver beat the Milwaukee Bucks 106-95.

Hunt is in his fifth season with Denver after five seasons as aCleveland Cavaliersassistant coach.

The timing of the dismissal was somewhat surprising, given that just last week Connelly seemed to signal Shaw's job was safe, at least through the end of the season.

The Nuggets are in the midst of a six-game losing streak and have struggled in compiling a 20-39 record this season under Shaw.

"This has been a trying season for all of us," team president Josh Kroenke said in a statement. "And we appreciate Nuggets fans' continued faith and patience as we build our proud organization back to the NBA's elite."

On numerous occasions, Shaw complained to Nuggets management about the maturity and professionalism of some of the players, but he was told to try to work through the issues, sources told ESPN.com's Ramona Shelburne.

He experimented with canceling shootarounds in an effort to work with the players. But it had become clear to all involved that the situation wasn't salvageable.

Players wouldn't comment on Shaw's firing as they left the Pepsi Center after a meeting Tuesday morning before their game against theMilwaukee Bucks.

Bucks coach Jason Kidd said he had dinner with Shaw on Monday night and Shaw didn't appear to have any inkling his firing was imminent.

"This wasn't anything, I don't think, he saw coming," Kidd said after his team's morning practice. "It's unfortunate what happened with B-Shaw, being one of my mentors as a player and also a good friend."

The Nuggets are mired in a 10-game home losing streak, one shy of tying the franchise record set in 1997-98. They broke a huddle coming out of a timeout in Friday's home loss to the Utah Jazz with a chant of "1-2-3 ... Six weeks!"Shaw denied the team was referring to the end of the season, which is about six weeks away, and said it actually referred to the most recent time Denver won a home game.

The affable Shaw was seemingly on the hot seat in November after Portland torched the Nuggets for 84 points in the first half. It was the most points scored in the first half by a Denver opponent since Phoenix scored an NBA-record 107 points on Nov. 10, 1990.

Things began to settle down, though, and the Nuggets went on a five-game win streak. Later, Shaw even eliminated morning shootarounds on game days to give his players more rest.

In January,Ty Lawsonwas arrested for investigation of driving under the influence. A month later, the speedy point guard skipped the first practice after the All-Star break when he missed his flight back from Las Vegas. That didn't sit well with Shaw, who kept Lawson out for a game.

Before joining the Nuggets, Shaw had served as an assistant coach with theIndiana Pacers.

Informed of Shaw's dismissal, Pacers forwardDavid Weststood up for Shaw.

"That's bulls---. There are no grown-ups on that roster," West said. "You can't win without grown-ups."

Shaw succeeded longtime coach George Karl, who was ousted after Denver won a franchise-record 57 games in 2012-13 only to be bounced from the first round of the playoffs for the fourth consecutive season.

Karl, who was hired as theSacramento Kings' coach just under a month ago, said he did not take any pleasure in hearing the news.

"Any time a coach gets fired, my [emotions] are usually down," he said Tuesday. "It's a tough job. It's a great job, one of 30. My mood toward the Denver Nuggets lately over the last four or five months, I've felt bad for them. I didn't want to see them hit bottom like this. They've played poorly.

"Brian should know there's a lot of coaches that failed in their first stint and have come back to be very, very good coaches in this league. It's how he learns from this experience and perseveres through it. Hopefully, he'll have another chance to be a head man someday."

Shaw's first season as an NBA head coach was marked by injuries and a dispute with point guardAndre Miller, who was eventually traded to Washington. The Nuggets went 36-46 and missed the playoffs for the first time since 2002-03. The Nuggets returned to health this season but failed to live up to expectations.

"On behalf of everyone in the Denver Nuggets organization, I would personally like to thank Brian for his services the past two seasons in Denver," Josh Kroenke said. "He is a champion and a gentleman, and I wish him nothing but the best for himself and his family moving forward. Since we purchased the franchise in 2000, we have constantly strived to field a competitive team, culminating in 10 straight playoff appearances and a franchise-record 57 wins in the 2012-13 regular season. Expectations have been raised, and we want more.

"This season, our management staff has remained patient and supportive, as decisions of this nature are never taken lightly. Patience is encouraged, as long as the organization continues to show progress toward a greater goal. However, competing for championships is our goal, and therefore, we decided to make this decision now and look forward to conducting an extensive head coaching search upon the season's conclusion. This has been a trying season for all of us, and we appreciate Nuggets fans' continued faith and patience as we build our proud organization back to the NBA's elite."

Sources told ESPN.com's Marc Stein the Nuggets plan to take a longer-term approach when it comes to finding a replacement, but a few names have already emerged as likely targets.

Former Suns, Knicks and Lakers coach Mike D'Antoni, whose NBA head-coaching career began with the Nuggets during the lockout-shortened 1999 season, is interested in the position, sources said. NBA coaching sources identify ESPN analyst Avery Johnson, who had two playing stints in Denver, as another strong candidate.

Warriors associate head coach Alvin Gentry, meanwhile, is expected to be a candidate for virtually every coaching opening this offseason, as is former Warriors coach Mark Jackson, who rejoined ESPN this season after his dismissal in Golden State. Former Bulls and Clippers coach Vinny Del Negro, furthermore, interviewed for the Nuggets' job before it went to Shaw.

Information from ESPN.com's Ian Begley and The Associated Press was used in this report.