Norv Turner: Adrian Peterson 'one of the top guys I've been around' 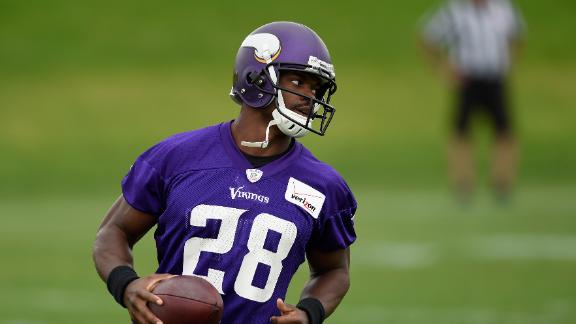 EDEN PRAIRIE, Minn. -- Adrian Peterson finished his first week of practice back with the Minnesota Vikings on Thursday afternoon, and after three days of organized team activities with Peterson on the field, it seems as though the former league MVP hasn't missed a step.

Peterson returned to his familiar spot with the Vikings' first-team offense Thursday afternoon in Minnesota's first practice open to the media since Peterson returned to the team Tuesday. The running back made some decisive cuts, catching a swing pass from Teddy Bridgewater, and left teammates impressed by how fit he was after an 8-month absence from the team.

"I haven't been around him a year, or six months. I didn't know he'd come back in this type of shape," cornerback Captain Munnerlyn said. "The guy is in unbelievable shape, like he hadn't missed a step, and he's out to prove a point."

The 30-year-old running back hasn't spoken to reporters since a news conference Tuesday, and he was not available to the media after Thursday's practice. But offensive coordinator Norv Turner said Peterson retained a large section of the Vikings' offense after his time away from the team and has been eager to learn the new concepts the Vikings are adding to their offense.

"I've been around a lot of these guys a lot of years, and he's one of the top guys I've been around," Turner said. "He just comes out and looks like he hasn't missed a day. It was nice having him."

Peterson reported to Vikings OTAs on Tuesday, ending his time away from the team nearly nine months after he was indicted on child injury charges in September. He had voiced displeasure with the Vikings earlier this offseason, telling ESPN he believed the team hadn't shown him sufficient support during his legal battle last fall. After the Vikings maintained they wouldn't trade Peterson, the running back skipped the first week of Vikings OTAs, releasing a statement to ESPN saying he was trying to secure his future in Minnesota and tweeting a series of messages about the need for guaranteed contracts in the NFL. Peterson, whose deal will pay him $12.75 million this season, has no guaranteed money in the final three years of his contract.

After talking with coach Mike Zimmer last week, however, Peterson decided to report to the team without any assurances of a restructured contract. Now, the Vikings are optimistic about what Peterson can mean to their offense.

Vikings excited to have Peterson back
ESPN Vikings reporter Ben Goessling breaks down the impact of Adrian Peterson's return to the team on the offense.