No suspension for Kevin Stallings 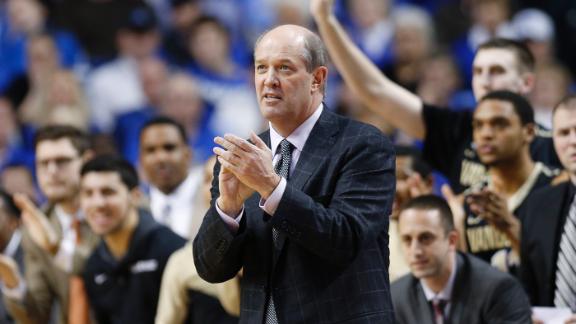 Vanderbilt athletic director David Williams said Friday that Kevin Stallings' outburst after the Commodores' win at Tennessee was "unfortunate" and he will handle the issue internally.

Stallings will not be suspended, Vanderbilt confirmed Friday.

"I met with Coach Stallings earlier today about last night's post-game incident," Williams said in a written statement. "We agreed that Kevin's offensive and inflammatory language directed toward a student-athlete was inappropriate, regardless of the high emotions at the time. Coach Stallings and I agree that as head coach, he must exemplify the high code of conduct he expects from his team members. This is an unfortunate incident since Coach Stallings has always stood for high ideals in academics, character and sportsmanship during his 16 years as our head coach.

"I understand that coach's action has generated discussion and opinions; we have heard from those supporting the coach's intent and from those angered and embarrassed by his comment. Coach Stallings apologized to the student-athlete after the game as well as issuing an immediate public apology. Vanderbilt considers this a personnel issue and as such it will be handled internally."

After the Commodores' 73-65 victory, Baldwin was seen clapping in the face of Tennessee forward Armani Moore, and Stallings was informed of Baldwin's actions by a Vols staff member. The Commodores coach then pulled Baldwin out of the handshake line and loudly and profanely berated him, at one point saying, "I'm going to f---ing kill you."

Stallings told ESPN "he did not mean his words literally" when confronting Baldwin.

"I handled it completely inappropriately, and I apologized to Wade -- and I need to apologize to our fans and the Vanderbilt administration," the longtime coach told ESPN. "Having said that, and it may seem as though I'm trying to rationalize my behavior, sportsmanship will continue to be a high priority. I did not mean it in the literal sense, and I've never touched a player in all my years as a coach. That's not me. I will learn from this and handle this situation differently in the future."

"These matters are best handled at the institutional level and we are satisfied Vanderbilt is handling this matter appropriately," Slive said in a statement.

Information from ESPN's Jeff Goodman and Andy Katz was used in this report.

Kevin Stallings Won't Be Suspended
Jeff Goodman reacts to the news that Vanderbilt basketball coach Kevin Stallings won't be suspended for his postgame incident after his team's win over Tennessee.

Vanderbilt Coach Stallings Berates Player
Vanderbilt head coach Kevin Stallings lost his temper and got in the face of Wade Baldwin IV because of unsportsmanlike conduct after the Commodores' win over the Volunteers.