No. 7 recruit PF Cheick Diallo says he has committed to Kansas Jayhawks 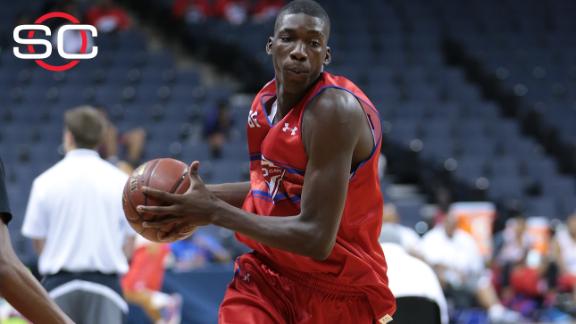 Cheick Diallo, the No. 7 recruit in the ESPN 100, has committed toKansas, he told ESPN.com.

"I felt like Kansas was the best place for me," said Diallo, a 6-foot-9 power forward. "I can earn playing time right away. I played against Joel Embiid in high school and watched his development. I need to work on a lot of things and feel coach [Bill] Self can help my game. On my visit, the campus was great and the people were nice. I could see myself there."

Jayhawks coach Self has been known as a strong closer in the late signing period and is well-known for his high-low offense and his successful history of developing big men.

Diallo, a two-time MVP in the postseason at the McDonald's All-America Game and the Jordan Brand Classic, had a strong career at Our Savior New American (New York) and a fantastic finish to his senior year.

With Diallo, Kansas adds a physical presence with a 7-4 wingspan who never gives up on a play. He is an ultra-athletic forward who can rebound and block shots. His offense will develop under Self, who has a long history with talented big men.

After the departures of Kelly Oubre Jr. and Cliff Alexander to the NBA draft, Kansas faced a void of athletic ability and size. Self and his staff have addressed those needs with the addition of ESPN No. 21 Carlton Bragg, a 6-9 power forward, and now Diallo. The addition of Diallo takes previously unranked Kansas to No. 13 in the 2015 class rankings.

Now, the Jayhawks could boast one of the best frontcourts in the Big 12. Kansas already returns 6-8 forwardPerry Ellis, the team's leading scorer this past season at 13.8 PPG, and reservesJamari TraylorandLanden Lucas.Addto that Bragg, who can stretch the defense with his outside range, and Diallo, and Kansas has plenty size and depth up front.