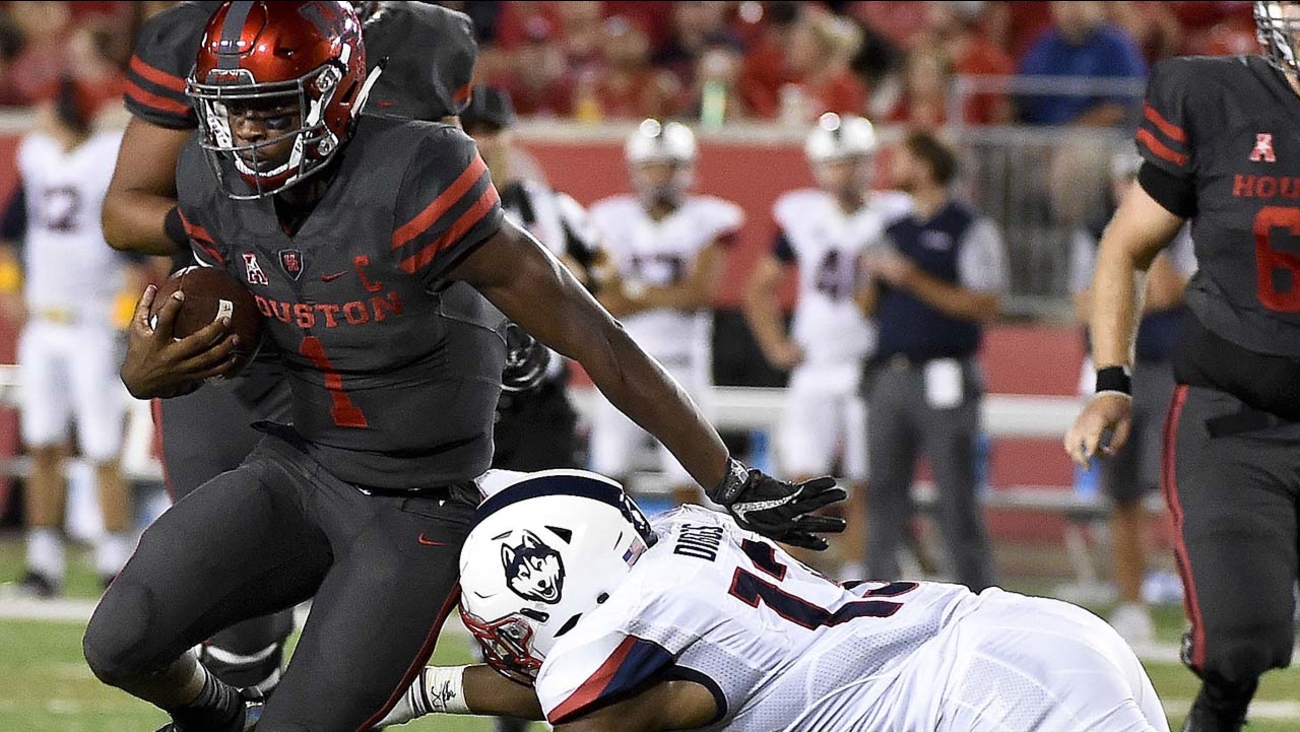 The victory was a bit of redemption for the Cougars, whose only loss last season came in a 20-17 defeat by the Huskies when they were 10-0.

Ward didn't start that game because of an ankle injury, and there was a scary moment early in the second quarter when he took a hard hit in the midsection by Junior Joseph on a flea-flicker and had to leave the game.

But he missed just one play before returning and showed no ill effects from the blow, leading the Cougars (5-0, 2-0 American) on three more touchdown drives in the half to leave Houston up 28-7 at halftime.

Ward and Joseph got in each other's faces after another hit by the linebacker on a touchdown throw by Ward later in the second quarter, and it earned Joseph an unsportsmanlike conduct penalty.

Ward had touchdown runs of 30 and 10 yards and threw scoring passes of 3, 15 and 4 yards. He was replaced by Kyle Postma with 12 minutes remaining.

Linell Bonner had a highlight-reel play when he stretched out to grab a reception with one hand for a touchdown that pushed Houston's lead to 42-7 in the third quarter. He finished with 12 receptions for 159 yards - both career highs.

Noel Thomas had a career-high 135 yards receiving and a touchdown for Connecticut (2-3, 0-2), and Bryant Shirreffs threw for 239 yards and ran for a TD.

The Cougars weren't slowed by playing without three starters on Thursday. Running back Duke Catalon and linebacker Tyus Bowser both missed the game with head injuries and coach Tom Herman sat linebacker Matthew Adams for reasons the team said Herman would address after the game.

CONNECTICUT: The Huskies didn't commit any turnovers after being plagued by them in recent weeks, but they were simply overmatched by the Cougars on both sides of the ball.

HOUSTON: The Cougars continued the dominance they've shown all season, having no trouble putting away the Huskies after last year's misstep. With Ward leading the offense and a swarming defense which finished with four sacks, it's hard to imagine that anyone has much of a chance to beat the Cougars before their Nov. 17 showdown with No. 3 Louisville,