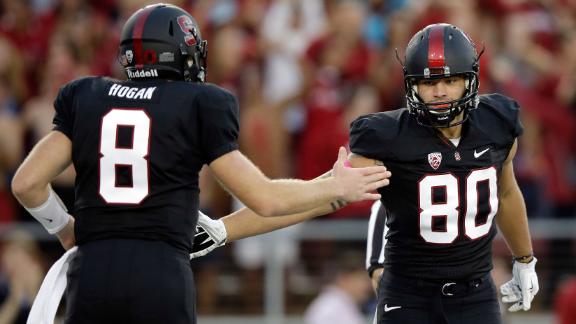 STANFORD, Calif. -- The defense came as advertised for Stanford, and so did the offense.

Cardinal coach David Shaw is at the point where he finally accepts the good is going to come with the bad this season, and he just hopes his players can overcome the miscues when the competition gets tougher.

Kevin Hogan threw for 284 yards and three touchdowns, and No. 25 Stanford slowed down Connor Halliday and the Air Raid offense in a 34-17 victory over Washington State on Friday night.

That approach was enough to get by a one-dimensional team. Whether it will work against the Pac-12 heavyweights on the horizon -- including games at Arizona State, UCLA and Oregon -- is still to be determined.

Greg Taboadagrabbed his first two career TDs and fellow tight end Eric Cotton had his first scoring catch to help the Cardinal (4-2, 2-1) rebound from a nonconference loss at Notre Dame and renew their chase for a third straight conference championship.

A week after Halliday threw for an NCAA-record 734 yards in a 60-59 loss to California, the nation's stingiest scoring defense harassed him all over the backfield.

Stanford held Halliday to 42-for-69 passing for 292 yards and two touchdowns on mostly short and intermediate passes. The Cardinal also forced one interception and had four sacks.

"We didn't have time for downfield passes," Halliday said.

The Cougars (2-5, 1-3) have lost two in a row, and their chances of making consecutive bowl games under Mike Leach look dim.

Stanford improved to 9-0 after losses under Shaw and hasn't dropped consecutive games since October 2009. But penalties and mistakes in the red zone kept the Cardinal from taking control -- which has been a theme this season -- against a Washington State defense that struggled again.

The usually stoic Shaw even broke character a couple of times, although it was often directed at officials, including tossing his headset while arguing on the sideline for pass interference. He also dropped his hands to his side and shrugged after fullback Patrick Skov fumbled while trying to stretch the ball over the goal line late in the first half.

Stanford still outgained Washington State 477 to 266 yards -- enough to bring a smile out ofTiger Woodson the sideline -- and leaned on its defense to do the rest.

The Cardinal entered the game with the country's best scoring defense (8.6 points) and ranked second in total defense (232 yards) and passing defense (107 yards) per game. They lived up to the billing again, hurrying Halliday constantly to break up the Cougars' pass-happy schemes.

Halliday moved Washington State well, at times, but never found his quick-strike prowess. He tossed a 9-yard touchdown pass to Vince Mayle in the first quarter and threw across his body for a 3-yard TD strike to River Cracraft on fourth down to slice Stanford's lead to 24-17 early in the fourth.

Cracraft finished with 14 receptions for 100 yards.

Montgomery hauled in seven passes for 72 yards, Cotton caught a 39-yard TD pass and Taboada tallied two short scores from Hogan to give the Cardinal a 24-10 lead. Hogan completed 23 of 35 passes.

Jordan Williamson made two of three field goals, including a 34-yarder to extend the Cardinal's lead to 27-17 with 8:13 left. Quentin Breshears kicked a 46-yard field goal for Washington State earlier.

Remound Wright ran for 98 yards and a TD in the closing minutes, and Barry Sanders had 68 yards rushing as the Cardinal totaled 193 yards on the ground. The Cougars had minus-26 yards rushing.

Cougars cornerback Charleston White was helped off the field several minutes after colliding with teammate Darius Lemora in the third quarter. Stanford wide receiver Devon Cajuste also stumbled off the field after taking a hard hit, and linebacker James Vaughters left with an undisclosed injury.