No. 2 Gonzaga needs rally vs. Santa Clara to extend win streak to 16 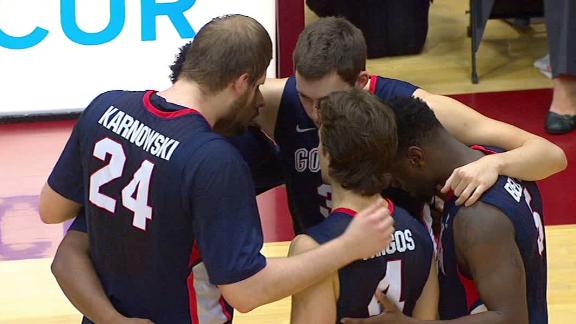 SANTA CLARA, Calif. -- As soon as Gonzaga stopped giving the ball away, the Bulldogs shot their way to another victory.

Byron Wesley scored 17 points and keyed a crucial second-half run that helped No. 2 Gonzaga rally for its 16th straight win with a 77-63 victory over Santa Clara on Thursday night.

"We had 10 turnovers in the first half," Wesley said. "That's unlike us. We knew once we started taking care of the ball and make them take tough shots, we'd be fine."

Gonzaga shot a season-high 69 percent from the field to overcome a sloppy first half and win the game. The Bulldogs now are shooting 53.3 percent this season. According to ESPN Stats & Information, no team has finished a season with a field goal percentage that high since the 1991-92 Duke team (53.6 percent).

Jared Brownridge scored 25 points to lead the Broncos (11-13, 5-7), who have lost 26 straight games against ranked teams and 10 straight to the Bulldogs.

"We have to understand that if we play that hard all the time, we'll win some games," coach Kerry Keating said.

Gonzaga fell behind by six early in the second half on a 3-pointer by Brandon Clark despite shooting better than 70 percent from the field.

The Bulldogs then tightened up on defense while still converting at a torrid pace offensively and tied the game at 47 when Kevin Pangos hit a 3-pointer for his first points of the game with 14:37 left.

Wesley then scored the next five points to give Gonzaga the lead for good. The Bulldogs went on a 16-3 run overall as the Broncos missed eight of nine shots to end their upset bid.

"In the first half, they were hitting a lot of shots," Wiltjer said. "What really made the difference was our defensive efficiency. We got stops in the second half. That's what really changed the momentum."

Bell started the game quickly, making three straight 3-pointers to give Gonzaga a 21-10 lead less than seven minutes into the game. But the Broncos rallied behind Brownridge and a string of Bulldogs turnovers to take the lead at halftime.

Brownridge hit a 3-pointer to cap a 10-0 run that gave Santa Clara its first lead of the game. Brownridge scored the final 12 points of the half for Broncos, including a layup that made it 36-34 at the break.

"They're the No. 2 team in the country coming in, so we had some extra energy and we were able to feed off the fans," Brownridge said. "Now we have to keep this going into our next game."

Gonzaga: The Bulldogs trailed at halftime for just the second time this season. Gonzaga trailed Southeastern Louisiana 33-32 on Dec. 2 before winning 76-57.

Despite leading the team in scoring, Wiltjer would have rather had two fewer points. He dunked at the buzzer, drawing boos from the crowd and the ire of coach Mark Few about the needless exclamation point.

"I feel really bad for that," Wiltjer said. "I apologize to the fans and the coaches. It's the heat of the moment. Someone said something on the sideline, and I took it personal. That's not me."

Andrew Papenfus, who played his first game Saturday since undergoing brain surgery in October, will sit this weekend for Santa Clara after suffering a mild setback in his recovery.

Gonzaga: At San Francisco on Saturday.