No-16: Browns survive Chargers for first victory of the season 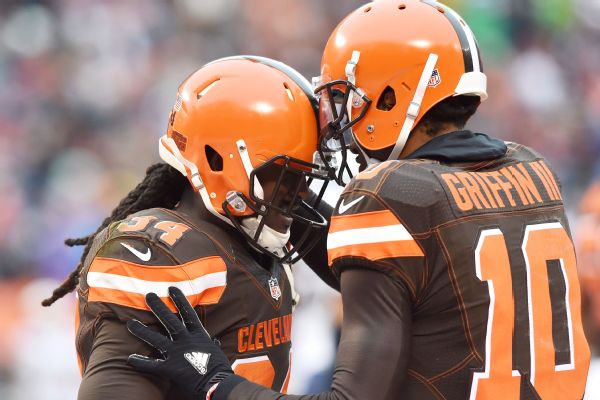 "I think I was looking for people to hug," Thomas said. "And there were a few tears in my eyes."

A boisterous crowd of perhaps 35,000 or 40,000 exulted and the Browns danced on the field, knowing they wouldn't have a winless season after their 20-17 win over the Chargers.

The emotion was out of proportion to a one-win team, but it took 15 games to get that one win.

This victory went down to the final play and wasn't secured until Josh Lambowas wide right on a 45-yard field goal that could have sent the game to overtime.

"You don't want to say it was our Super Bowl, but it really was," Thomas said.

Nose tackle Danny Shelton ran on the field and pushed fellow lineman Emmanuel Ogbah to the ground and jumped on him.

"Then the D-line jumped on him," Shelton said. "Then I got Antonio Gates' gloves."

Terrelle Pryor said he dapped up Jamie Collins, then walked into the locker room to wait for the rest of the team to celebrate "a great moment," Pryor said. "A lot of guys crying."

Robert Griffin III, who left the field with a concussion in the fourth quarter, showed few signs of the injury as he knocked at Hue Jackson's closed door and walked in with a special greeting for the coach.

Linebacker Chris Kirksey reached for his phone an hour after the game ended and found 111 texts waiting for him.

This was pure emotion, as the players celebrated their first win in 2016.

"I was just saying to someone the other day," Jackson said, "we have not given out any game balls to anybody because we have not won a game. I do not remember ever being in that situation.

"Today, everyone gets game balls."

The Browns won because they were able to turn a 7-0 deficit into a 20-10 lead. They gave up a third-quarter touchdown but survived two Lambo field goal attempts in the fourth that could have tied the game.

The first was blocked by Jamie Meder, a 308-pound undrafted tackle from Ashland University who was hunkered down in the middle of the line. Meder grew up in Parma Heights, a blue-collar suburb directly south of Cleveland.

"The 'Pierogi Prince of Parma' does it again," Thomas said. "That man is awesome. He's one of my favorites. I think he's playing in a polka band here this weekend on Christmas day. If you guys get a chance, go out and watch him. He's the accordion player."

"I love a blue-collar guy like that." Thomas was sincere, saying he admires a guy who "has fought his way from the bottom."

Lambo's second try to tie came with the clock running; the ball was snapped with one second left.

"It was too rushed," Pryor said, pointing out why he had become so angry earlier this season, when the Browns had to burn timeouts early in halves. "Ten seconds to get out there and get set up. The kicker had to get his mind right and figure out what was going on. He didn't have time."

Every player credited the fans, saying a half-full stadium had the intensity of a sellout. Players marveled at the feeling for an 0-14 team.

"I want to thank the fans this year, for sticking with us," Pryor said. "The way that crowd was jumping ... it wasn't packed, but you'd think there were 100,000 people in there like it was Ohio Stadium (at Ohio State)."

Jackson said he was happy for the players, that they had not quit all season and deserved the win. After the game, a video on the team website showed an emotional Jackson hugging wide receiverAndrew Hawkins and talking about the importance of the team's veterans.

Players returned the warmth, with Gary Barnidge giving Jackson a game ball as a teary Thomas stood by, wiping his eyes.

"Nobody wants to go oh-and-whatever," Pryor said. "Like I always tell you guys, as much as Hue puts into it, we wanted this for him alongside the guys like Joe Thomas, the guys that deserved to win."

Said Thomas: "For me, for the guys that I talked to, we really wanted to get a win for Hue. We know that he's an outstanding coach. We know he's one of the best coaches in the NFL. We know that he's been given a difficult situation, but he's never lost his positive mindset.

"He brings energy and enthusiasm every single day."

It is only one win in 15 games, but to Jackson, the result was much more.

"It validates the work, all the hard work that these guys put in," Jackson said. "You have to give them something back."

The Browns exhaled loud and long, knowing they wouldn't be joining the 2008 Detroit Lions as the only 0-16 team in NFL history.

"There was a genuine feeling of joy," Thomas said.