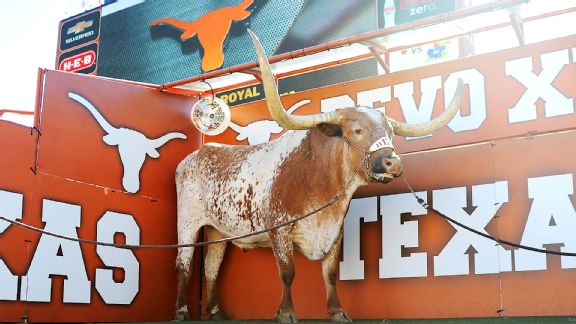 The Texas Longhorns made NFL draft history this week.

And not in a good way.

For the first time since 1937, the Longhorns failed to have a player selected in the NFL draft. Texas was one of just five schools from college football's five power conferences (Big 12, SEC, ACC, Big Ten, Pac-12) to suffer the ignominious feat. Illinois, Northwestern, Rutgers and fellow Big 12 member Kansas were the others.

The Texas shutout, however, was one of the big surprises of the draft.

The Longhorns entered the weekend with six draft hopefuls, including All-American and Big 12 Defensive Player of the Year Jackson Jeffcoat, who also won the Ted Hendricks Award as the nation's top defensive end. All 32 NFL teams attended Texas' pro day March 26 to scout Jeffcoat and other Texas prospects.

After advancing to the 2009 national championship game, Texas signed the nation's No. 2 recruiting class, which included Jeffcoat and 18 other players who were given either four or five stars. But that class never lived up to its billing, and the Longhorns went just 30-21 over the last four years.

Following an 8-4 finish to the 2013 regular season, Brown resigned before the Valero Alamo Bowl, and was eventually replaced with Louisville's Charlie Strong.

In contrast to Texas, the Cardinals produced arguably their best draft ever, with safety Calvin Pryor, defensive end Marcus Smith and quarterback Teddy Bridgewater all going in the first round. Louisville and Texas A&M were the only schools to have three picks go in the first round.

In addition, 14 players were selected from schools in the state of Texas.

According to the Elias Sports Bureau, Notre Dame now has the longest streak of at least one player drafted at 77 straight years. The Fighting Irish and Longhorns had entered this drafted tied for the longest streaks.