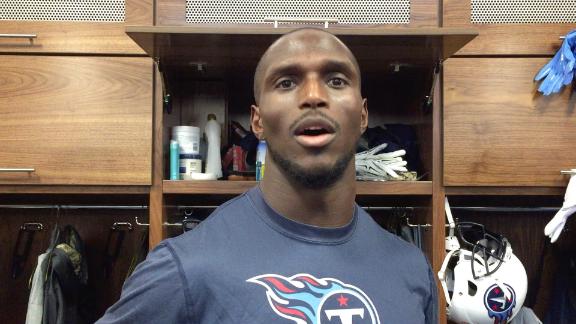 NASHVILLE, Tenn. -- The Tennessee Titans had a bye week while players around the rest of the league wore cleats on a day carved out for players to make a statement for a cause.

Despite missing the My Cause My Cleats weekend, the Titans initially were not granted permission to wear their individualized shoes beyond warm-ups Sunday, when they return to action against Denver at Nissan Stadium.

"We have spoken to both the Titans and Browns," Ravitz said. "Players from the two teams on a bye last week can participate in My Cause/My Cleats in Week 14."

McCourty and his twin brother,New England PatriotssafetyDevin McCourty, have a joint charity called Tackle Sickle Cell. Devin wore his shoes during the Patriots' home win over the Rams on Sunday.

"I believe you should be [allowed], so I'll be wearing mine for the game," Jason said.

Even though players are now allowed to wear specialty cleats, some players may not have gone through the process of getting them made because of the league's initial stance. And it may be too late for them.

"We should be able to, us and Cleveland," Titans linebacker Brian Orakposaid before the league reversed course. He would have had shoes designed to show his support for leukemia and lymphoma charities.

Receiver Andrew Hawkins, the Cleveland Browns' player rep, said before the reversal that while he hoped the league relented, he wouldn't be surprised if players wore My Cause cleats regardless.

"If they fine guys for wearing them, I think that'd be a black eye for the NFL," Hawkins said. "Especially since it's all about good causes and everything."

Most Browns players said they hadn't had time to think about what shoes they would choose because they were under the impression the league would not reconsider.

Browns offensive linemanJoe Thomas said that, if permitted, he would wear cleats representing Team Rubicon, a charitable organization founded by Jake Wood, his former teammate at Wisconsin. The charity uses veterans for rapid responses to disasters, and has helped in places like Haiti (to assist earthquake victims) and Greece (refugees).

When the Titans played Minnesota on Sept. 11 to open the season, linebacker Avery Williamson wore cleats honoring victims and responders on the 15th anniversary of the attacks on the United States.

Despite reports that he'd be fined, he ultimately was not.