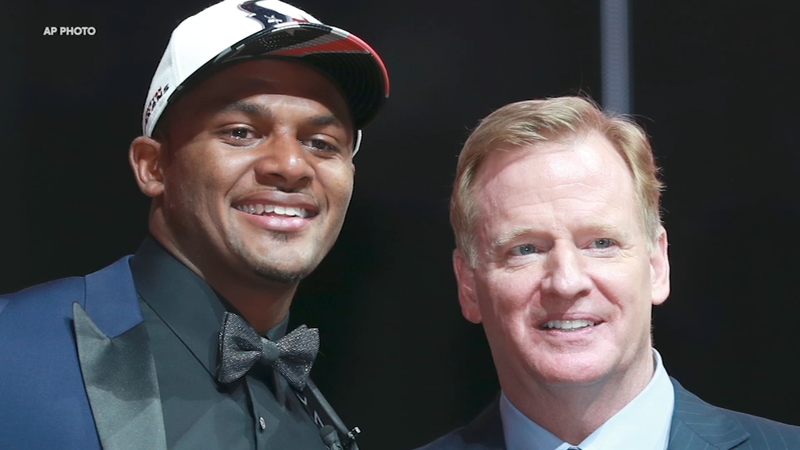 HOUSTON,Texas (KTRK) -- Day two of the 2021 NFL Draft gets underway Friday, but the allegations against Houston Texans quarterback Deshaun Watson continues to linger around the league.

NFL Commissioner Rodger Goodell addressed the allegations of sexual misconduct in an interview before the first round of the NFL draft.

"Obviously, we take that very seriously," Goodell said to ESPN on Thursday. "Those are very concerning to us, and so, we're obviously following that and obviously looking at that ourselves independently. There are important steps that we'll be taking, obviously, as part of our personal conduct policy. When we get to that point, we'll certainly make a decision."

Half a dozen women who are accusing Houston Texans quarterback Deshaun Watson of sexual assault are now coming into the public spotlight. The women insisted on being present at a court hearing on Thursday because they were called liars by Watson's attorney. In the video above, ABC13's Miya Shay has more from both sides of this case.

The civil lawsuits originally filed under the pseudonyms of Jane Doe from March 16 to April 2 allege sexual misconduct and sexual assault by Watson during massage therapy sessions.

Ashley Solis was one of two women who spoke out for the first time in a press conference held by Houston attorney Tony Buzbee on April 6.

Watson's attorney, Rusty Hardin, requested for all the alleged victims to be identified per Texas law, and two district judges granted the motion.

At the time, there were 23 pending civil lawsuits against Watson. One woman did not want to be named, citing safety concerns, subsequently bringing the total to 22 civil cases.

Meredith Duncan, law professor at the University of Houston Law Center, said since these are civil cases, the plaintiffs or alleged victims do not get the same protections as they would had it been a criminal case.

"I think another takeaway is that so far, there have not been, to my knowledge, any criminal charges that the district attorney has filed based on these claims," Duncan said. "Although the D.A. must be aware of the existence of these lawsuits. I think that is something we need to keep an eye on too."

ABC13 reached out to attorneys Hardin and Buzbee for an interview. Both declined. The next status hearing is set for next Friday, May 7.

"The cases have not made it very far along on the civil side, and so I think we just have to be very careful not to condemn the defendant in a case like this until we have more information," Duncan said.