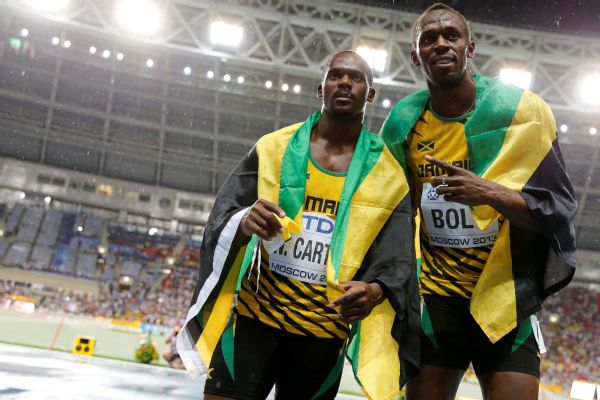 Jamaican sprinter Nesta Carter is appealing the ruling that cost him, Usain Bolt and the rest of the Jamaican 4x100-meter relay team a gold medal at the 2008 Beijing Olympics.

Carter filed his appeal with the Court of Arbitration for Sport on Wednesday, his lawyer,Stuart Stimpson, told Reuters.

In January, the International Olympic Committee said Carter tested positive for methylhexaneamine, a banned stimulant, in reanalysis of samples from the 2008 Beijing Games.

Though methylhexaneamine was not specifically named on the 2008 list of prohibited substances, it "fell within the scope of the general prohibition of stimulants having a similar chemical structure or similar biological effect as the listed stimulants," the three-member IOC panel wrote. The IOC referred to a possible challenge from Carter on those grounds in its written verdict.

"The Court of Arbitration for Sport has confirmed that the presence or use of substances falling within the scope of generic definitions of the prohibited list, can be used as a basis of establishing anti-doping rules violations," the verdict said.

The 4x100 victory had been one of three gold medals won by Bolt in Beijing, along with victories in the 100 and 200 meters. Bolt repeated the three-race sweep in the following two Olympics.

"I wasn't pleased. Nobody would be pleased over the years to lose a medal," Bolt said last month after the IOC ruling. "It's just one of those things. Things happen. I'm not happy about it, but what can I say?"

Trinidad and Tobago is in line to get the gold medal from 2008, Japan could be upgraded to silver, and fourth-place finisher Brazil could get the bronze medal.