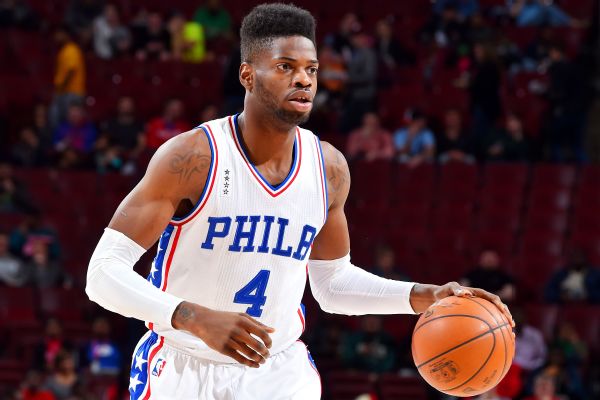 While Philadelphia 76ers big man Nerlens Noel may not have gotten the answers he was looking for, he was feeling a bit better about things after a meeting with coach Brett Brown.

"You might get emotional sometimes, and I'm human and I want to play basketball at the highest level," Noel told reporters Saturday, one day after publicly complaining to reporters about playing just eight minutes in a loss to the Los Angeles Lakers. "Now moving forward, it's taking it day by day and keep improving."

Noel played in his second game of the season Friday after undergoing surgery on his left knee in late October. He played just 10 minutes in his season debut on Sunday before leaving the game with a sprained ankle.

Friday's game also marked the first time the Sixers had all three of their young big men -- Noel, Joel Embiid and Jahlil Okafor -- available together at the same time. While all three struggled to develop a rhythm, Noel had just two points in his eight minutes.

"I think I'm too good to be playing eight minutes," Noel said Friday night. "That's crazy. Need to figure this s--- out."

Brown understands Noel's frustration and hopes Saturday's meeting will help them get on the same page.

"He's highly competitive; he's in a very unusual situation," Brown told reporters Saturday. "The fact that it came out as soon as it did caught me off guard. We've discussed it, and I'll be surprised if everybody's not seeing how we all need to handle this better going forward."

Noel told reporters he isn't pointing fingers at Brown, understanding that the coach is facing a tough situation.

"We had a conversation. He kept it more real with me, so I respect him a little more for that," Noel told reporters. "You see some things with more insight, and you handle it how you want to, and just handle it the right way."

Brown said he wouldn't call the situation "impossible" but said everyone from ownership to Bryan Colangelo, the team's president of basketball operations, recognizes the challenges ahead with Noel, Embiid and Okafor on the roster.

What that means for Noel in the short term is unknown, but he hasn't lost confidence in himself.

"I know that I'm going to keep working. Nothing's going to stop me," Noel told reporters. "I'm a prideful player, and I'm going to keep going. I've been through a lot these past four years ever since I got hurt [tearing his ACL in college in 2013], so I don't think anything really can overwhelm me at this point."