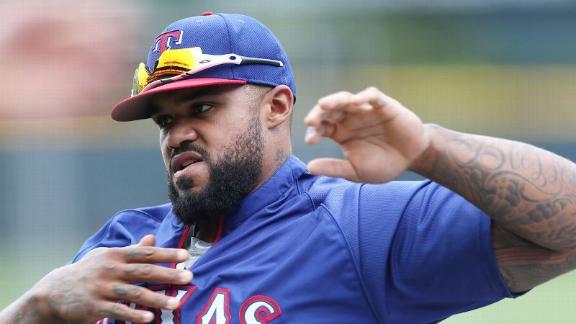 DETROIT -- Texas Rangers slugger Prince Fielder is expected to have season-ending fusion surgery Tuesday to repair a herniated disk in his neck.

Fielder's symptoms got worse earlier this week and he saw spine specialist Drew Dossett on Thursday morning. It was recommended he have surgery, which requires a three- to four-month recovery period that would end his season.

Rangers general manager Jon Daniels said Fielder will get a second opinion, but he expects the original recommendation to be confirmed.

Fielder, 30, was acquired in a blockbuster trade in November with the Detroit Tigers for All-Star second baseman Ian Kinsler. The Tigers also agreed to pay $30 million of Fielder's salary.

Fielder received a nerve-root injection Saturday morning and took a few days off. He passed a strength test Monday night and was penciled into Tuesday's lineup. He was scratched after he said he felt some weakness in his left arm while trying to hit in the batting cages.

"I wasn't surprised, just because after talking to him and seeing him, you know this was something that was bothering him," Daniels said. "We were hoping the injection could get him through the season. His initial response was positive. But the symptoms came back."

Fielder does not have a history of injuries in his career and had played 547 consecutive games --  the longest active streak in the majors at the time -- and 162 games in four of the past five seasons heading into 2014 before getting Saturday's injection. He was batting .247 with three homers and 16 RBIs before the injury.

Daniels also announced that infielder Jurickson Profar re-injured a shoulder muscle, a Grade 2 strain. He has been shut down and is out eight to 12 weeks.

"When you talk to him and when the medical staff tests his strength, he's got a real deficiency in his left arm," Daniels said. "He's much weaker in his left arm because of this disk herniation. I have no doubt it's affected his play."

Daniels said the team's spate of injuries -- Fielder is the 14th Rangers player to go on the disabled list this season -- has him looking at every process the club goes through in terms of physicals and training. He also said he doesn't second-guess himself that Fielder didn't get a physical prior to the trade going through this offseason.

"In this case, a cervical MRI, at least for us, has not been part of our standard physical," Daniels said. "A guy that had no history and no documentation, no treatment and no issues that anyone was aware of, had we done a physical, we wouldn't have done a cervical MRI. There may be other clubs that do that as standard practice. We're going to look into that. The bigger question is, 'How do we get better?' "

Daniels said he has never seen so many injuries hit a team in all areas at the same time. But he isn't ready to write off the season, either.

"I'm proud of the guys and what they've done so far," he said. "I'm not going to count this club out. They've handled adversity pretty well here."

Fielder Off The Field
Baseball Tonight analysts Tim Kurkjian and Jayson Stark break down how the Rangers will fill the void at first with Prince Fielder having season-ending surgery.