Nebraska to look into allegations made by Iowa's Faith Ekakitie 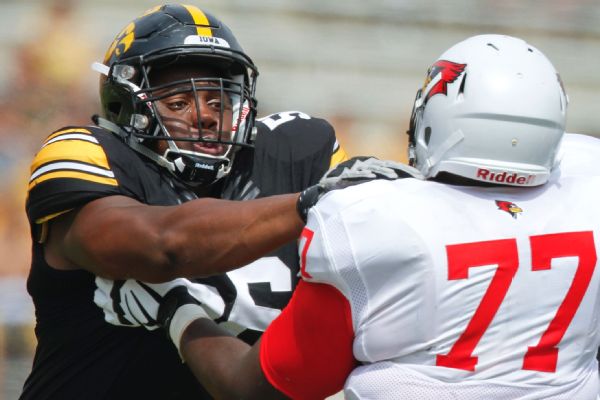 IOWA CITY, Iowa -- The Nebraska athletic department says it is conducting an investigation into an allegation that a Nebraska football player slung racial slurs at an Iowa football player as the Big Ten rivals played in Iowa City on Friday.

Iowa defensive tackle Faith Ekakitie said he was the target of racial slurs from a Nebraska offensive lineman whom Ekakitie declined to name during postgame interviews Friday evening, the Des Moines Register reported.

Nebraska Athletics said in a statement Saturday night that it has reached out to Iowa to ascertain the facts regarding the allegation.

"In addition, we are conducting our own internal review of the matter. Regardless of the outcome of our review, Nebraska Athletics does not condone such conduct of any kind, at any time, by anyone associated with our athletics program," the statement said.

An Iowa team spokesman said Saturday that Hawkeye officials had no comment on Ekakitie's assertion.

The 6-foot-3, 290-pound Ekakitie is a native of Brampton, Ontario, and went to high school in Lake Forest, Illinois. He finished with five tackles in Iowa's 40-10 win over Nebraska.

Ekakitie said it was the first time he had been targeted by racial slurs while playing.

"Anyone that is willing to openly go out of their way and throw that around -- even in a competitive environment -- I think you're a piece of trash," he said.
Related topics:
sportsespnhuskersiowa hawkeyescollege footballfaith ekakitienebraska cornhuskers
Copyright © 2022 ESPN Internet Ventures. All rights reserved.
TOP STORIES
3rd monkeypox case confirmed in Houston area, officials say
There are many ways to eat healthy amid high food prices, experts say
Biden signs landmark gun measure, says 'lives will be saved'
A hot weekend ahead of more widespread rain chances next week
Bank of America apologizes to refugee family for account mix-up
6 people killed over span of 12 hours in isolated incidents in Houston
Love the outdoors? Galveston Island State Park is reopening
Show More
Astros' 2nd time ever to no-hit NY
Houston Pride 2022: Where and how to celebrate
Teenage daughter stabs father during fight in SW Houston, police say
17-year-old charged with murder after giving friend ride
Settlement would forgive $6B for defrauded college students
More TOP STORIES News