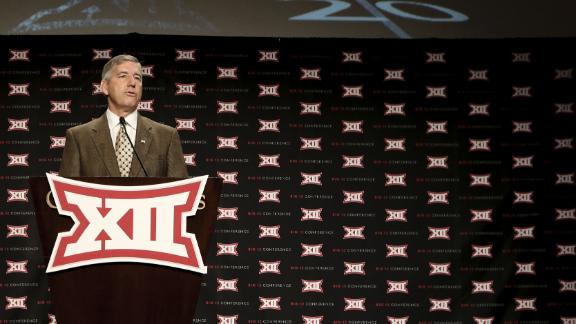 INDIANAPOLIS -- Jonathan Duncan understands that a perfect NCAA enforcement division won't catch every cheater in college sports. He still believes his team is getting the job done.

Two days after Big 12 commissioner Bob Bowlsby called the NCAA enforcement system overwhelmed and "broken," the NCAA's top cop fired back by defending his staff's work and acknowledging the impossible mission of policing more than 1,200 schools.

Yes, sometimes teams or schools might get away with breaking the rules for a while, Duncan said, but eventually most are caught.

"We don't pretend to be able to catch every violation in any given year," Duncan told The Associated Press on Wednesday. "So the next question is, do we have a handle on it, and the answer is yes, I think we do. The people who violate the rules will be found out, and we will report them back to the committee on infractions."

Duncan took over the enforcement division on an interim basis in March 2013 when the department was embroiled in its own embarrassing scandal. An internal investigation found the NCAA improperly collected evidence against the University of Miami, which led to the ouster of Julie Roe Lach.

Duncan took over a department that was losing experienced investigators and saw morale wane as it came under intense public criticism -- criticism that hasn't diminished and has lately included leaders such as Bowlsby, a former athletic director at Iowa and Stanford.

Bowlsby put NCAA enforcement back in the spotlight Monday when he suggested the lack of high-profile cases over the past year is indicative of problems within the current system.

"Enforcement is broken," he said. "The infractions committee hasn't had a hearing in almost a year, and I think it's not an understatement to say cheating pays presently."

He added about the NCAA: "They're in a battle with a BB gun in their hand. They're fighting howitzers."

Duncan, an attorney whose private practice work included representing the NCAA, said statistics show roughly 20 schools are formally charged with major infractions each year -- and he expects this year's number to hit 21. In addition, Duncan said investigators have looked into roughly 5,000 secondary infractions, a record.

Numbers tell only part of the story.

A year after NCAA president Mark Emmert boasted that tougher penalties had "upped the ante" on schools and coaches doing risk-reward analyses when it came to cheating, Duncan said the perceived slowdown in major cases in Division I is a result of an increased caseload in Divisions II and III and investigators' attempts to focus on more complex allegations that threaten the current collegiate model.

He also said schools are going to greater lengths to avoid punishment and that it's difficult to obtain evidence when third parties are not compelled to testify. The NCAA lacks subpoena power.

Duncan still expects the logjam to be broken next year, when he estimates the infractions committee could hear an average of one major case per month.

While Bowlsby declined to comment further on the issue Wednesday, Gerald Gurney, president of The Drake Group, an NCAA watchdog, didn't hold back. He said the NCAA relies far too much on media reports and competing schools to do the legwork on investigations, and suggested that outsourcing investigations could speed things up.

"Bob Bowlsby says the enforcement unit is broken, and my reaction is, 'Duh, of course, it took you that long to figure it out?'" Gurney said. "If we're interested in fairness, it starts with giving schools and individuals real due process. Right now, once you get a notice of inquiry, you're presumed guilty, and we've seen schools fire coaches regularly without due process. People don't have much confidence in this (system)."

Duncan does believe in it.

And while some have complained the NCAA doesn't have enough investigators, Duncan insists his staff can do the job with the 50-plus people currently in enforcement.

"If the membership were to entrust me with additional resources, I would use them wisely," he said. "I feel strongly about my job to be a good steward financially. In the meantime, though, I feel like we have a talented staff to do what our resources allow us to do."

Even if some people believe they're doing nothing at all.

Big 12 Commissioner: Cheating Pays
"College Football Live" addresses a comment made by Big 12 commissioner Bob Bowlsby, who said "cheating pays" in the NCAA these days; the analysts discuss whether they think that's true.