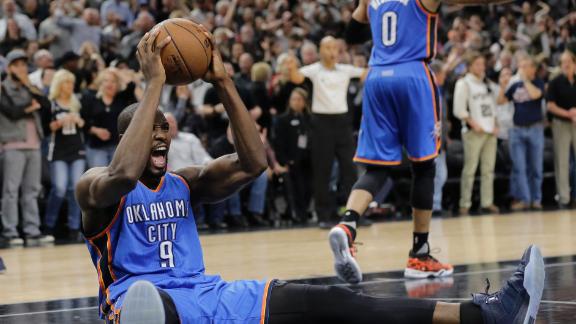 The NBA listed five incorrect non-calls from the final 13.5 seconds of Monday's game between the Oklahoma City Thunder and the San Antonio Spurs.

Spurs guard Manu Ginobilishould have been whistled for delay of game for stepping on the sideline as he was attempting to defend the game's final inbounds play, and Thunder guard Dion Waiters should have been called for an offensive foul for crossing the out-of-bounds plane and hitting Ginobili with his elbow as he inbounded the ball, the league said Tuesday in its last-two-minutes report.

After the ball was inbounded by Waiters, fouls should have been called on the Spurs' Patty Mills and Kawhi Leonard. The league said that Mills grabbed and held Thunder center Steven Adams, and that Leonard grabbed Russell Westbrook's jersey.

Finally, after the Spurs stole the inbounds pass and made a final effort to hit a winning shot, a shooting foul should have been called on Thunder forward Serge Ibaka for grabbing and holding the jersey of LaMarcus Aldridge with 2.6 seconds left.

The National Basketball Referees Association also tweeted Tuesday that the play would be used in training moving forward.

The NBA listed three other missed infractions by the Spurs that occurred before the final-play scramble.