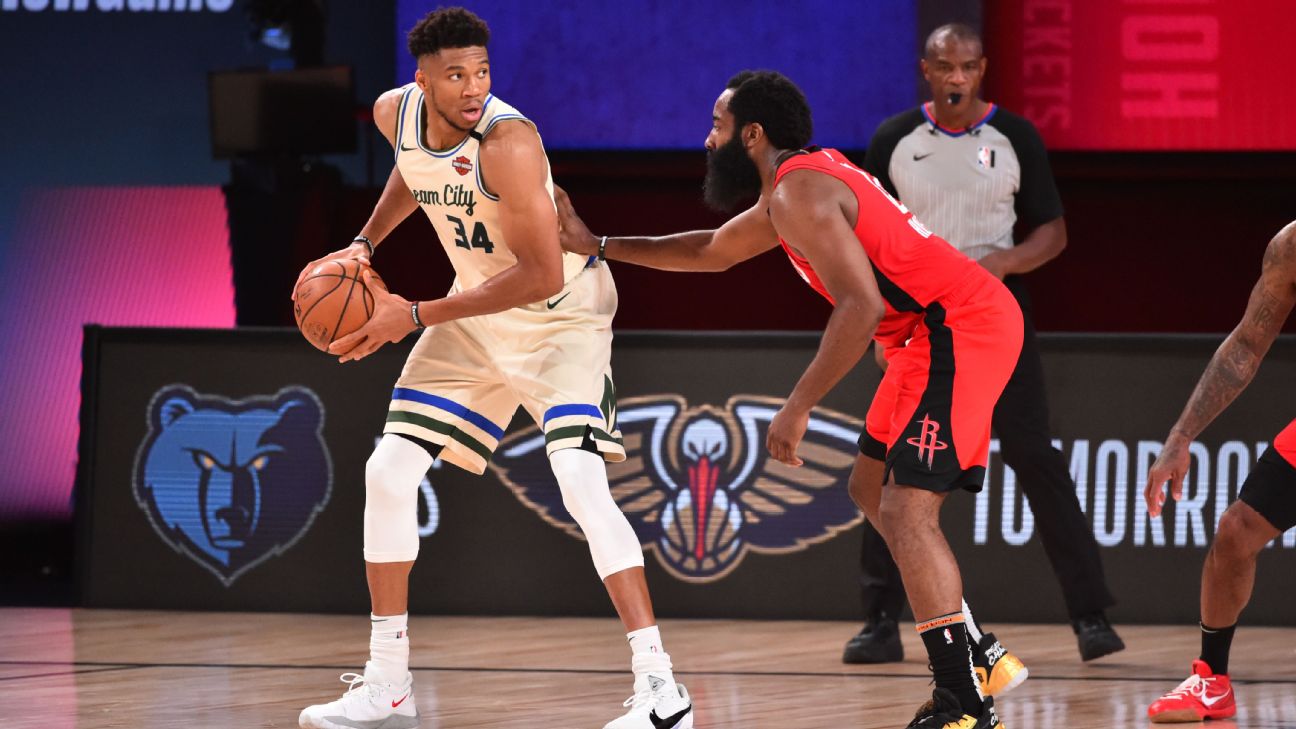 Even after Sunday's 120-116 Rockets win over the Milwaukee Bucks.


"I have nothing to prove to anybody," Harden said. "Nothing to say."

Although he leads the league in scoring by a wide margin, it was Harden's late-game defense that helped seal the latest victory. In the final 2 minutes, 30 seconds, Harden played a key role in forcing three turnovers against the Bucks -- including two by Antetokounmpo.

With under 20 seconds to go, Harden stopped the reigning MVP as he dribbled up the court, forcing him to try a cross-court pass, which resulted in a turnover.

"Very, very important. I thought throughout the course of the game, we played some really good defense," said Harden, who ended with 24 points on 5-for-14 shooting from the field. "Obviously they're a good offensive team, but throughout the course of the game, we got stops when we needed to. Offensively, we had a lot of opportunities. A lot of open shot opportunities that we normally make that we missed. So overall, a good, competitive game."

Antetokounmpo finished with 36 points, 18 rebounds and 8 assists to join former Bucks star Kareem Abdul-Jabbar as the only players to record 15 30-point, 15-rebound, 5-assist games in a season over the past 50 seasons, per ESPN Stats & Information research. But Milwaukee squandered a 13-point first-quarter lead and gave up 30 points off of their 23 turnovers; the Bucks had only 21 assists.

Houston is now 2-0 in the bubble, despite facing double-digit deficits in both games. The Rockets trailed 112-104 with 3:14 left to play but closed the game on a 16-4 run. Friday night, Houston overcame a 138-131 deficit with 45.2 seconds left in regulation to win in overtime against the Dallas Mavericks.

Meanwhile, the NBA-best Bucks are 2-5 in their past seven games, dating to before the league suspension. Availability has played a role -- the Bucks were without reserve wing Pat Connaughton and starting point guard Eric Bledsoe for the second consecutive game, as both continue to work themselves back into game shape after testing positive for the coronavirus.

Both are missed -- Bledsoe for his ballhandling and defense at the point of attack, Connaughton for a bench that has plenty of viable options but received no more than five points from any individual in Sunday's loss.

"Whenever we step on the floor we try to win, but at the end of the day we've got to improve each game," Antetokounmpo said. "Win or lose, we've got to get ourselves ready to play good basketball when we need it the most.

Boston's bet on Tatum and Brown is paying off

LAKE BUENA VISTA, Fla. -- Still dealing with a minutes restriction as he continues to build up strength in his balky left knee, Celtics star Kemba Walker was forced to sit and watch from the sidelines during the fourth quarter of his team's frenetic matchup with the Blazers.

But as Walker looked on while Boston's two young wings, Jaylen Brown and Jayson Tatum, powered the Celtics to a victory with a combined 64 points -- tied for the most the two have scored in any game together in their careers, per ESPN Stats & Information research -- any frustrations he felt from having to watch were replaced by excitement for the future.

"They're gonna have to love each other, because their talent level is unreal, and it could take our team to great heights when they're playing basketball on that kind of level."

A team built around Tatum and Brown playing at an elite level for the next decade is why Boston resisted the temptation to trade for available stars over the past several years. Instead of moving one of them for anyone from Anthony Davis to Kawhi Leonard to Paul George to Jimmy Butler, Celtics president of basketball operations Danny Ainge instead chose to stand pat, betting on his young talent to rise to that level in the future.

Sunday was the latest indication that bet may just pay off.

Tatum was spectacular early, shrugging off an awful 2-for-18 performance against the Bucks by scoring 21 points in the first half and finishing with 33 points plus a career-high eight assists. On one of those assists, Tatum hit Brown in the corner for an incredibly difficult shot to help put the game away in the final minute.

Brown, meanwhile, scored 16 of his 30 points in the fourth quarter, making one spectacular shot after another to stymie a furious push from Portland, which is fighting for a playoff spot.

The Celtics don't have such problems. Boston will almost certainly be the No. 3 seed when the postseason begins in a couple of weeks. But for the Celtics to make the kind of playoff run they hope to, they're going to need Brown and Tatum to play this way on the biggest stages. So far this season, both have taken dramatic leaps forward, paying off Boston's faith in their shared development. And, as Sunday showed, when the lights get bright, they are both capable of rising to the occasion.-- Tim Bontemps

Suns overcome 15-point deficit, become latest team to get the best of Mavericks in the clutch

The Dallas Mavericks, the top offense in the NBA, had an opportunity to bounce back after a demoralizing Friday night loss to the Houston Rockets. It looked as if they would cruise on the Phoenix Suns, with All-Star point guard Luka Doncic scoring 23 points in a first half that saw Dallas lead 73-60.


The Suns had other plans. Despite trailing by as many as 15 points in the first half and dealing with foul trouble to All-Star shooting guard Devin Booker, Phoenix ate up Dallas' entire lead by the end of the third quarter. The Mavericks never led in the fourth quarter, and the Suns held on late after missed 3s by Kristaps Porzingis and Tim Hardaway Jr. for a 119-117 win.

Doncic had 40 points and 11 assists, while Booker led the Suns with 30 points before fouling out. Despite the loss,Dallas still clinched a playoff spot.

All in the family

Before Russell Westbrook took the floor for the Houston Rockets in Sunday's main event, his wife, Nina, shared a photo of their three children watching the television.

Isaac drove the lane and did a hop-step between two defenders. He then immediately fell to the floor untouched while clutching his left knee in pain with 9:19 left in the fourth quarter.

The Magic won 132-116 to keep their lead for the Eastern Conference's 7-seed. But losing Isaac costs Orlando one of its best defenders and stunts the growth of a player who had worked to come back after injuring the same knee on Jan. 1.

Nets win crucial matchup in race for No. 8

Without Kevin Durant, Kyrie Irving and a slew of other players, the Brooklyn Nets were written off inside the bubble before the games even began. But as the clock wound down on Sunday afternoon, a trio within the organization's core made sure that the group would have at least one memorable moment on the Walt Disney World campus -- getting another step closer to a playoff berth in the process with a 118-110 win over the Washington Wizards.

Caris LeVert scored a game-high 34 points, outscoring the Wizards 14-12 by himself in the final seven minutes of play, while big man Jarrett Allen chipped in with 22 points and 15 rebounds and sharpshooter Joe Harris added 27 points of his own.

With the win, the Nets are now seven games ahead of the Wizards with six to play. Washington will need to be within four games of the No. 8 seed after the seeding schedule to qualify for a play-in tournament.

"It's huge," Harris said. "Obviously, you look at the schedule and you look at the standings and you realize the importance of teams that are sort of all jockeying for the same position. We're obviously competing to try and get in the playoffs, and there's no guarantees with the play-in format ... these games are extremely important for us."-- Nick Friedell

New Orleans Pelicans star rookie Zion Williamson says it has been hard to watch from the sideline as the team lost their first two games in the NBA bubble while his minutes have been limited.

"It's very tough to be honest because as soon as I start to break that sweat, I look over and that horn is for me and I have to come out the game," Williamson said Sunday. "Also, when I do catch the flow of the game, like I said, that horn goes off and it's for me." -- Andrew Lopez

In a close battle, the Washington Wizards failed in their attempt to gain any ground on the Brooklyn Netsin the race for eighth in the Eastern Conference. The Orlando Magic, who beat the Nets on Friday to take hold of the 7-seed, blew out the Sacramento Kings, who needed to bounce back from Friday's demoralizing loss to the San Antonio Spurs.


The San Antonio Spurs secured a huge win Sunday night against the Memphis Grizzlies, and with the Portland Trail Blazers' loss earlier in the day, San Antonio has now leapfrogged Portland for the No. 9 seed in the Western Conference.

It's a must-win situation for the Pelicans, who dropped their first two games in Florida. After Saturday night's loss to the LA Clippers, Pelicans small forward Brandon Ingram said, "We probably can't lose any more games" if the Pelicans want to make their playoff push. New Orleans has a 2-0 advantage on Memphis this season, so the Grizzlies will be looking for a bit of payback.

Monday's matchup will be the second contest of the season between South Carolina natives Ja Morant and Zion Williamson. Williamson (24 points) had the upper hand on Morant (16 points) in the first meeting, although the Grizzlies were missing Jaren Jackson Jr. and Brandon Clarke in that game.-- Andrew Lopez

This will be the third game for each team and both will be hoping for better performances than they had in their second games. Each team opened up play in Florida with a win Thursday but stumbled Saturday -- Utah losing to Oklahoma City 110-94, and Los Angeles falling to Toronto 107-92.

A win against Utah will clinch the best record in the Western Conference for the Lakers with five games to go before the playoffs. Meanwhile, Utah is in fourth place in the West, a game back of Denver for No. 3. Both teams will be looking to fix their offenses and get back on the right track.-- Lopez 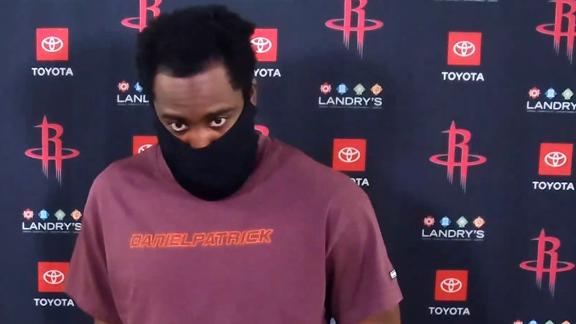 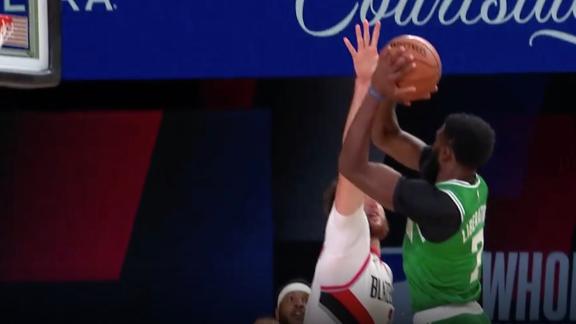 Brown sinks smooth double-clutch bucket over Nurkic
Jaylen Brown puts all the moves on display as he attacks the basket and makes a double-clutch jumper over Jusuf Nurkic. 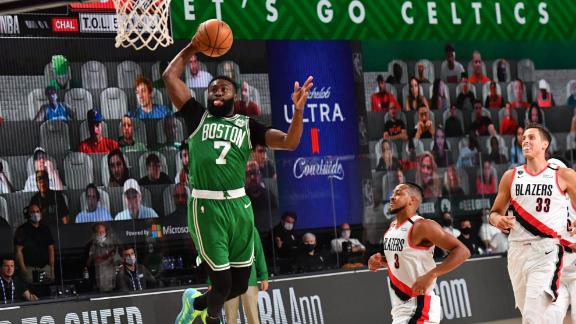 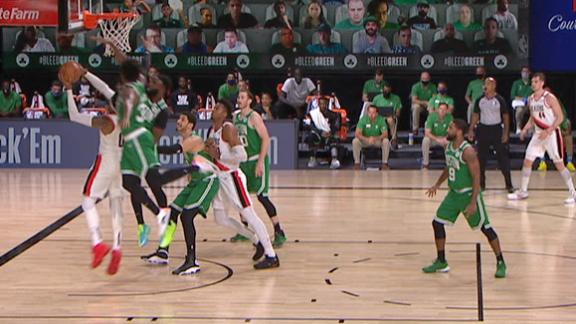 Smart rises high for the block on Melo
Marcus Smart gets way up for the huge block on Carmelo Anthony, which leads to a basket by Enes Kanter. 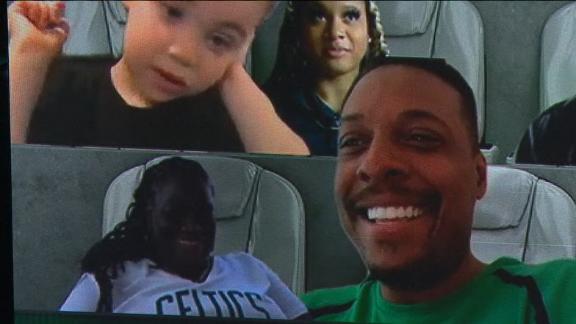 Pierce, Tatum's son in the virtual crowd watching the Celtics
Paul Pierce and Deuce Tatum pop up with the Celtics' fans taking in the game vs. the Trail Blazers. 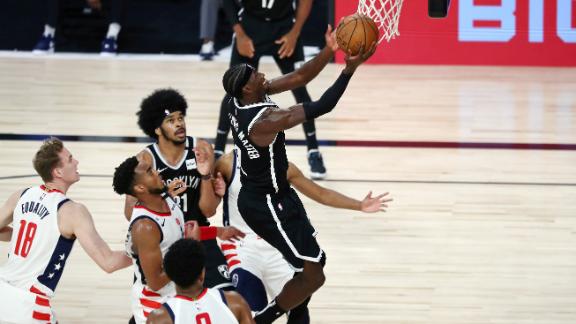 Levert's 34 points lead the Nets past the Wizards
Caris Levert dominates the field from every range possible, collecting 34 points as Brooklyn knock down Washington 118-110. 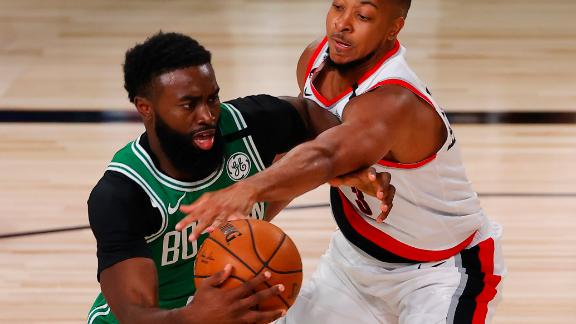 Brown erupts for 30 in Celtics' win vs. Blazers
Jaylen Brown puts on an explosive scoring performance putting up 30 points as the Celtics down the Trail Blazers 128-124. 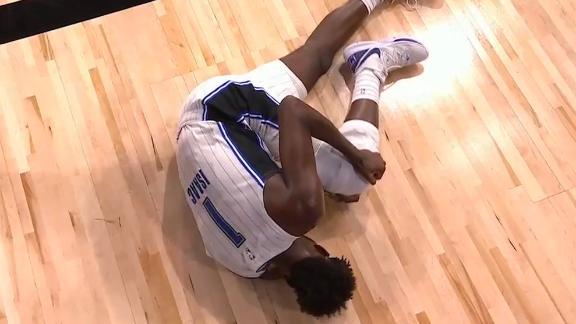 Isaac reinjures left knee, leaves game in wheelchair
Jonathan Isaac goes down with an apparent left knee injury in the fourth quarter after a layup attempt and is required to leave the game in a wheelchair. 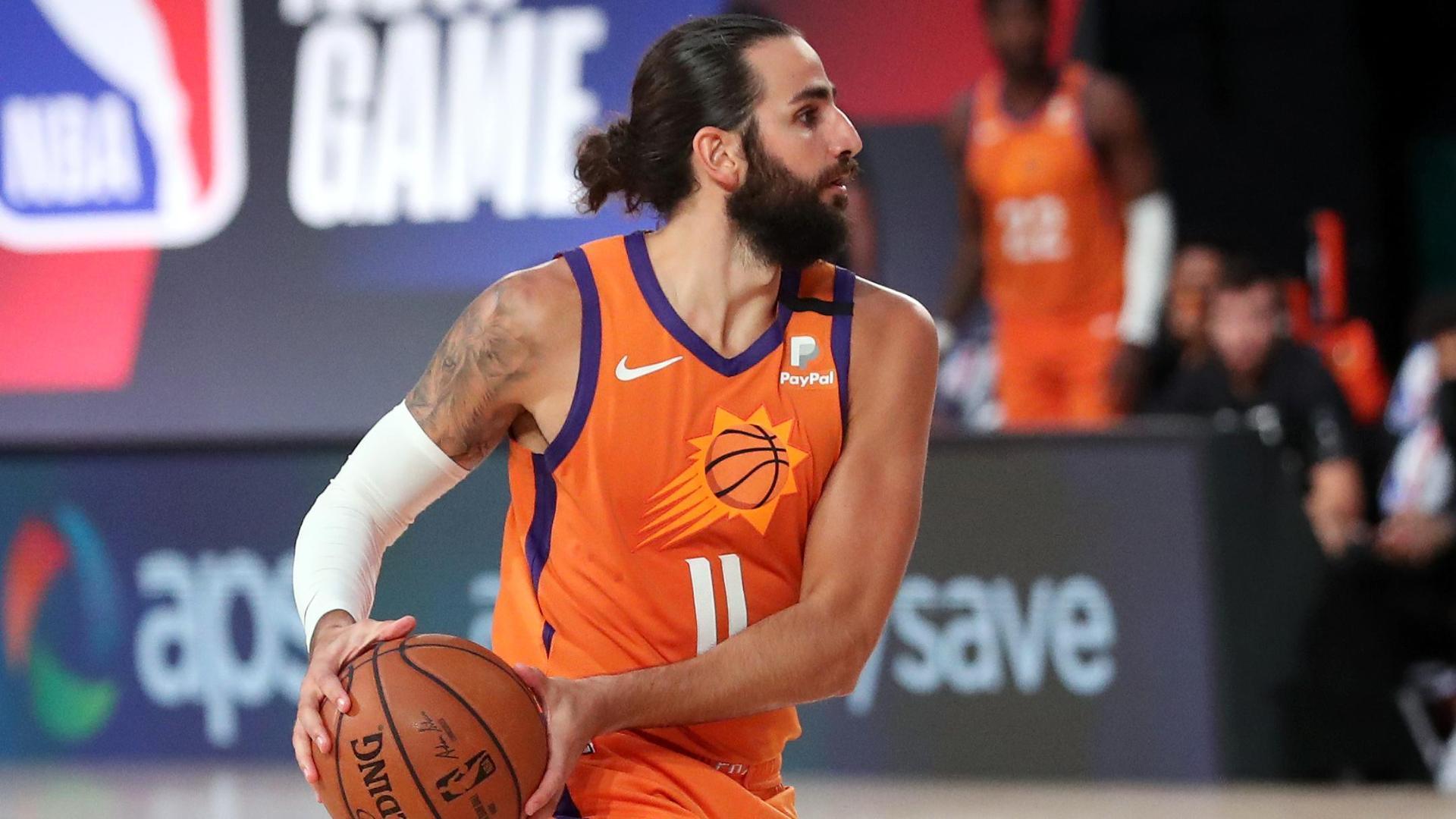