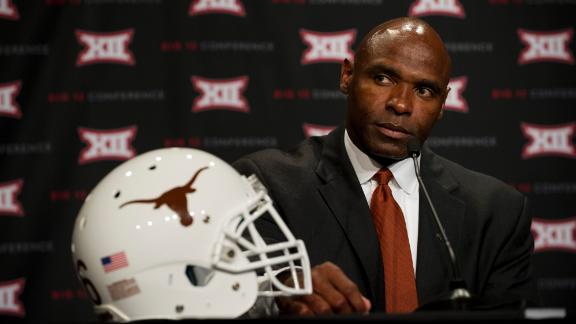 Texas football coach Charlie Strong has kicked at least six players off the team since becoming coach, in addition to suspending two Longhorns players Thursday after they were arrested on charges of sexual assault.

Safety Josh Turner, running back Jalen Overstreet and defensive back Chevoski Collins have been dismissed from the program for violating team rules, multiple sources told ESPN.com on Friday.

Senior running back Joe Bergeron was also dismissed from the program, according to Orangebloods.com and multiple media outlets Friday.

Texas has yet to officially acknowledge any of the dismissals.

Turner was a projected starter, a senior safety who played in 37 games and started five, including three in 2013. He had an interception in Texas' first spring game under Strong.

Overstreet, a sophomore, rushed for 102 yards and two touchdowns as a reserve last season after moving from quarterback to running back. Collins redshirted as a freshman and was a backup at safety. Orangebloods.com initially reported the dismissal of Overstreet and Collins.

Bergeron's reported dismissal comes three days after Strong told reporters at Big 12 media days that the senior running back "has done everything we've asked him to do" and was back on the team after a suspension this spring to focus on academics.

Six players have now been dismissed from the program since Strong took over. Fullback Chet Moss and defensive back Leroy Scott were kicked off the team in March for a violation of team rules.

According to one source close to the situation, as many as five more Texas players could be facing dismissals due to violations of team rules.

The dismissal of the four Texas players came soon after Texas receivers Kendall Sanders and Montrel Meander were arrested on sexual assault charges Thursday for an incident in June. Both players were suspended indefinitely by Strong, and their names already have been removed from Texas' official roster.