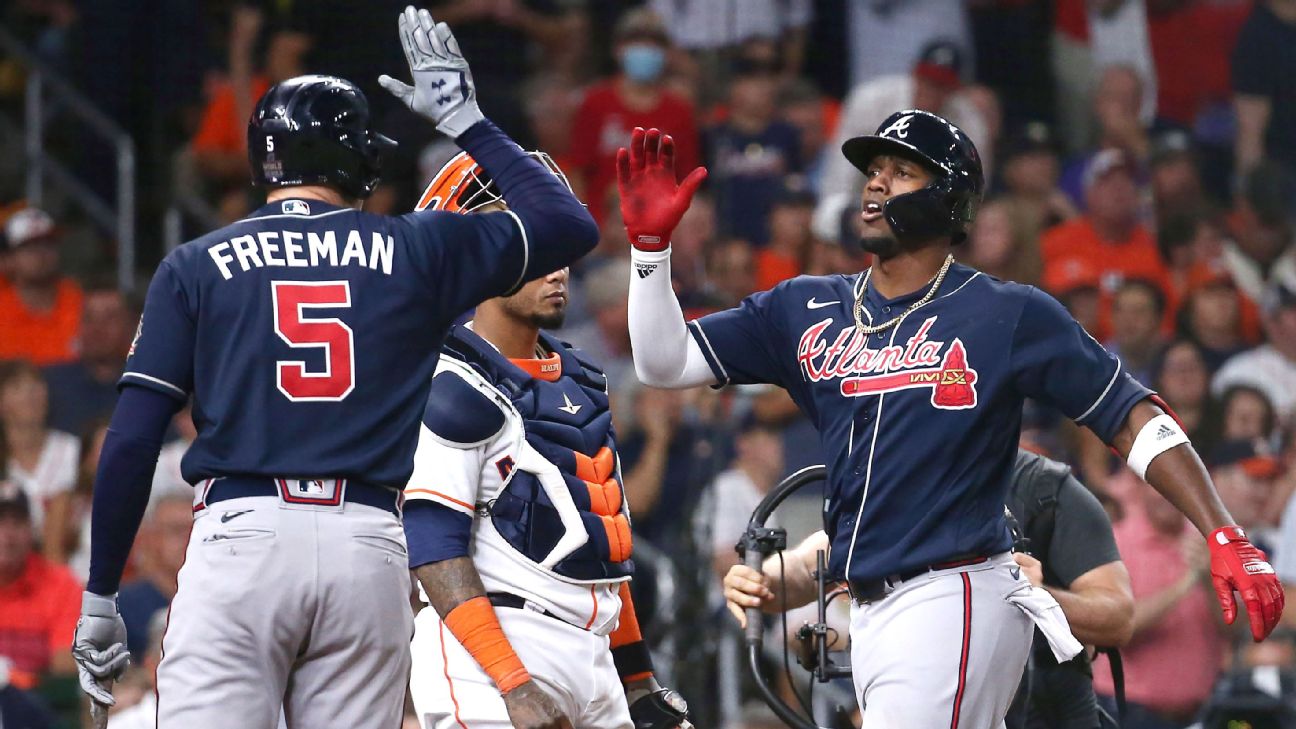 The big story of Game 1 of the World Series was Atlanta Braves pitcher Charlie Morton's fractured fibula that knocked him out in the third inning and the rest of the contest against the Houston Astros. The top highlight of the game might be the Braves' ace striking out Jose Altuve looking at a wicked 2-2 curveball, but completing his delivery in pain and leaving the game. The Braves won 6-2.

In the other dugout, the story was the quick exit of Astros starter Framber Valdez, lasting just two-plus innings and allowing five runs and eight hits -- the majority of those rockets of 100-plus mph, including home runs to Jorge Soler and Adam Duvall into the Crawford Boxes in left field.


But the biggest big story was the performance of the Atlanta bullpen, allowing just two runs to the potent Astros lineup over the final 6.2 innings. A.J. Minter and Tyler Matzek, coming off their dominating performances in the NLCS, did each allow run, but they also combined to pitch four innings. These are two lefties that have proven they can get more than two or three outs and the takeaway seems clear: If the Astros are going to win this, they're probably going to have to beat Minter or Matzek at some point. Minter did throw 43 pitches, so Brian Snitker would probably like to stay away from him in Game 2. Matzek threw 20 and he's told Snitker he can pitch every day, so his rubber arm should be available for Wednesday. Luke Jackson, coming off a rough NLCS, got five big outs between the two lefties, which should be a massive boost to his confidence.

Another thing to watch is the baserunning. We saw Dansby Swanson tag up from third and score on a shallow fly ball to right field and we saw Yuli Gurriel stumble on a slide while failing to stretch a single into a double. Let's see how team speed factors into the rest of this series. The Astros are a bad baserunning team, or at least a slow one. The Braves took the "extra" base 44% of the time in the regular season, fourth in the majors, while the Astros took it 36% of the time, which tied them with the Yankees and a couple of other teams for 25th through 28th best.

How important is Game 2, with Max Fried starting against Jose Urquidy? The road team has won the first two games of the World Series 14 times - and went on to win 11 times. The Astros will obviously need more from their right-handed batters against the lefty Fried: Jose Altuve, Alex Bregman and Carlos Correa went a combined 0-for-12 with one walk.--David Schoenfield

Here are some noteworthy plays and moments from Game 1 of the World Series:

Both teams score in the eighth

The Braves pad their lead to 6-1 in the eighth on Freddie Freeman's sacrifice fly to shallow right field - and frankly, no way should Dansby Swanson have been able to score on that play. Kyle Tucker's throw was weak and up the line and Jason Castro couldn't quite apply the tag. You can credit Braves' third-base coach Ron Washington with another aggressive send like in the NLCS - something to keep an eye on the rest of the series.

After a Yordan Alvarez triple, Carlos Correa grounded to second -- allowing the ALCS MVP to score. Yuli Gurriel looked to get in scoring position, but Eddie Rosario's rocket arm prevented a safe slide at second base.

Atlanta continues without its ace

Morton struck out Jose Altuve looking on a 2-2 curveball leading off the bottom of the third inning but grimaced as he completed his delivery and had to come out of the game. He grabbed his right ankle as he signaled to the dugout, and ESPN's Alden Gonzalez reports Morton appeared to injure his right anklewhile delivering a pitch to Astros left fielder Michael Brantley, then limped off the field after being checked on by the Braves' trainer.

The Braves now report that Morton will miss the rest of the World Series with a right fibula fracture. The Braves already left starterHuascar Ynoa off the World Series roster with shoulder inflammation and he's ineligible to be added to the roster. They did add Kyle Wright to the roster and he had a 3.02 ERA in Triple-A (but just two starts in the majors). If the idea was to tag-team him with Drew Smyly in Game 4, the Braves may now need to hold Wright back as a Game 5 starter/long reliever. Either way, between this game and then whatever happens in Games 4 and 5, it looks like the Atlanta bullpen is going to have to carry an extra big workload this series, putting pressure on Max Fried and Ian Anderson to go a little deeper in Games 2 and 3 -- and keep in mind that Brian Snitker has had a quick hook for Anderson in the postseason.

The Atlanta bullpen will now need to close out this game without their ace. Lefty pitcher A.J. Minter is the first one out of the pen, and he's been outstanding this postseason, with just two hits allowed over 7 scoreless innings. He did go two innings twice in the NLCS and had a three-inning outing in last year's NLCS, so he's capable of going multiple innings, but Snitker is likely going to have to go deeper into his pen than he would have liked in this game. Fellow lefties Tyler Matzek and Will Smith have also been outstanding in the playoffs, but Luke Jackson had a couple shaky outings against the Dodgers and he might have to get some big outs.

Braves stays hot in the third

Adam Duvall sends Valdezto an early shower with a two-run laser of a home run into left field for a 5-0 Braves lead in the top of the third. It traveled just 387 feet, but its exit velocity clocked at 111.7 mph.

That was eight hits off Valdez in just two-plus innings, and the Braves have already racked up six batted balls hit at 100-plus mph (and are the first team to score in each of the first three innings of Game 1 of the World Series). This is what can happen to Valdez if he's not getting low strike calls on his sinker, and he wasn't getting them from home-plate umpire Chris Conroy. It can quickly turn into batting practice.

Beginning with a bang

The World Series began with a big bang off the bat of Braves designated hitter Jorge Soler when he smacked a 2-0 sinker fromValdez into the Crawford Boxes in left field. Some history here: Soler is the first player to lead off the top of the first inning with a home run -- and he did it against a pitcher who is tough to go yard on, as Valdez allowed a 70% groundball rate in the regular season, best among starters in the majors. Austin Riley later doubled in Ozzie Albies, who had reached on an infield single and stole second, for the quick 2-0 lead. Riley's double came on a 3-0 count, so Valdez's inability to get ahead hurt him early.

Leading into the game, the pundits and analysts wondered if Snitker should have left Rosario in the leadoff spot, where he had thrived in winning MVP honors in the NLCS. But with the ability to add Soler to the lineup in the DH role, Snitker went with the platoon matchup and hit Soler leadoff, where he had thrived in September, and moved Rosario back down to the fifth spot. This will also make it harder for Dusty Baker to use one of left-handed relievers later in the game against Freddie Freeman, as Freeman has Soler in front of him instead of Rosario, and the switch-hitting Albies (who crushes lefties) behind him. -- David Schoenfield

Braves' starter Morton managed to get out of a bases-loaded situation in the bottom half of the inning.

A most Atlanta pregame meal

Braves pitcher Tucker Davidson, who is not on the postseason roster, saluted his team with a hearty Waffle House spread. 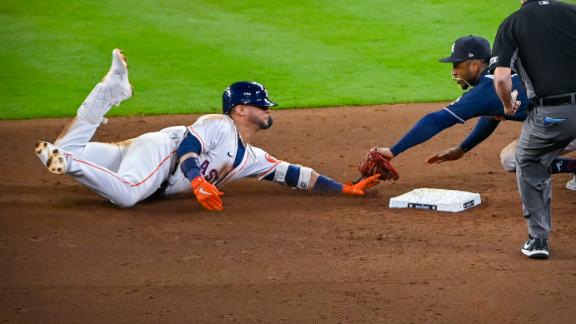 Gurriel thrown out at second base after near-homer
Yuli Gurriel hits a shot that nearly goes over the left-center field wall, but Eddie Rosario makes a great throw to get him out at second base.
Report a correction or typo
Related topics:
sportsespnatlanta bravesmlbculturedailyhouston astros
Copyright © 2022 ESPN Internet Ventures. All rights reserved.
TOP STORIES
HCSO sergeant hit and killed by driver during escort, sheriff says
2 adults killed and 12-year-old hurt in crash with speeding tow truck
Deputy constable shot and killed in southwest Houston
Grab the umbrella! Widespread showers move in Monday
Inside Texas hospital battling omicron: 'We're about to catch on fire'
Tax filing season starts Monday. What to expect for 2022
5 tax changes that can boost your refund this year
Show More
COVID-19 patient at center of ventilator fight dies in Texas
3-year-old drowns in pool in NW Harris County, sheriff says
Woman found in a ditch after a hit-and-run
Little York firefighters work to put out fire at N. Houston apartment
Former Houston Oiler takes over Prairie View A&M football
More TOP STORIES News