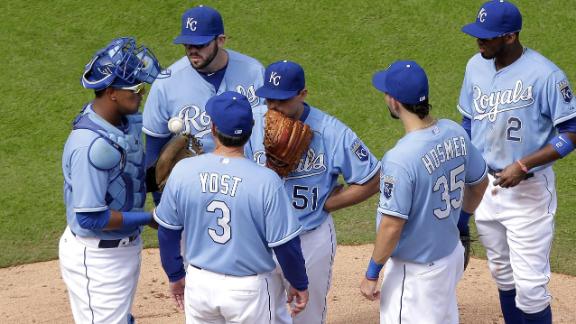 In an offseason in which baseball has committed itself to speeding up the pace of games, several players told ESPN.com this week that players want "a voice" in this process and they're concerned that, so far at least, no one except the players' union has asked them what they thought.

"Players are very interested in being involved in these discussions," veteran pitcher Kevin Slowey said. "We just want to be part of a collaborative effort to address these issues. And we want to have a voice. We don't want to overpower any other voices. We'd just like to have our voice heard."

"It's just important for us to have a say," Mets outfielder Curtis Grandersonsaid. "It doesn't need to be all 750 of us. It's just important to have three or four players who can say, 'Hey, we've noticed this, and we feel this way.'"

Manfred told ESPN.com, in an email, that Clark "represents all major-league players and was included on the committee to give players a voice. Tony and I have discussed the fact that it is important for players to interact directly with the committee as the process moves forward. Tony is in the best position to select representative players that should be involved."

Manfred also said his "expectation" is that, at some point in the process, the committee "will hear directly from players."

Players who did not want to speak publicly, however, told ESPN.com they're concerned that player involvement in these discussions will be limited.

Those players said they were disappointed by the lack of players on the committee, but Clark expressed hope that players will be actively consulted and listened to before the committee recommends any changes to the game.

"Player involvement is very important to this discussion or any other discussion, but particularly related to those involved with the game being played on the field," Clark said. "We're interested in having the dialogue. Our guys have concerns, and they're interested in being part of the solution. And now we'll see where it goes."

In order to gauge player opinion, ESPN.com reached out to players who have been active in the union and have been involved in the past in helping to lay the groundwork for change on important issues such as replay and baseball's Joint Drug Agreement. Not all of those players were willing to be quoted. However, they outlined several areas of concern over what they are seeing and hearing about baseball's pace-of-game approach:

That too much of the blame for slowing the game -- and most of the responsibility for fixing it -- seems to have been placed on players. Players complained that Selig has made a number of comments about how "aggravated" he is with hitters who step out of the box after every pitch and start "adjusting all the crap [they] have on." That tone, said one player, "isn't helping."

That almost none of the talk so far has been about other ways to speed up games, particularly shortening commercial breaks between innings.

That there has been very little discussion about how modern analytics may be slowing games, such as the emphasis on hitters taking more pitches to run up pitch counts and extensive matchup information that encourages more pitching changes and substitutions.

That while players are generally in favor of shorter games, they haven't been shown survey data documenting exactly what fans are telling baseball it needs to change and what those changes would accomplish.

"I would guess that players have no problem with games being shorter," Diamondbacks reliever Brad Zieglersaid. "But if you're talking about pitchers who have built up a routine for 15 or 20 years and now they're going to be asked to change it, that's something they should discuss with the players first."

Ziegler was referring to pace-of-game innovations now being studied in the Arizona Fall League that include 20-second pitch clocks for pitchers with no one on base, and rules that require hitters to keep one foot in the batter's box.

All players whom ESPN.com spoke with said they were in favor of having those measures tested in the Fall League, but that they don't want to see them automatically implemented without extensive study and conversation. While players agree there's a need to eliminate dead time, they are worried about the possibility they could feel rushed at an important juncture in a game.

"If I don't feel right, or I'm not on the same wavelength with my catcher, I want to have the ability to step off and regroup, or call the catcher to the mound," Slowey said. "Any one pitch can change a ball game. And any one game can change the course of a season. I don't think we want to look back and say, 'Who knows what might have been if that hadn't happened.'"

Granderson said he played in the Arizona Fall League a decade ago when similar rules were being studied, and the restrictions on hitters leaving the box were so effective that "it's something I've done ever since," he said. But he expressed fears about the unintended consequences of having a pitch clock on the scoreboard in a packed stadium.

"The interesting thing is, what if fans in the stadium start counting down all at once?" he asked. "You could have a situation where there are 10 seconds on the clock, and fans are yelling, '3-2-1,' and messing the pitcher up. ... And the next thing you know, the hitter and the pitcher are both rushing to the clock because they don't want a violation."

Manfred attempted to allay those fears by reiterating he felt it was "important to have player input on any on-field changes," and that any rule changes would have to be bargained with the union. But before it reaches that point, players remain hopeful that their input will be solicited and valued.

"We're certainly open to hearing anything the other side wants to tackle," said Slowey, who pitched for the Marlins last year and is currently a free agent. "I don't think great ideas always come from one side. They can come from anywhere. The more people you listen to, the better chance you have of finding a solution. ...

"My hope," he went on, "is that something they have on their schedule is to reach out to us and say, 'Get us a dozen, or two dozen, pitchers who can give us input on this. And the same goes with batters, on the rules about stepping out of the box. Our hope is that they'll say, 'We want to sit down with you guys because we want to get this right.'"