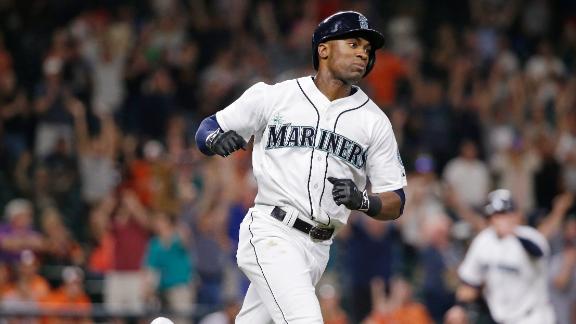 When the Seattle Mariners beatBaltimore6-5 in 10 innings -- one of four walk-off wins on Tuesday night -- it marked the first time in baseball history all 15 home teams won on the same day.

Viewing every game as a 50-50 proposition independent of all others, STATS figured the odds of a home sweep on a night with a full 15-game major league schedule at 1 in 32,768 -- or about once every 80 years, according to Louis Mittel, a a doctoral candidatein statistics at Columbia University.

According to the Elias Sports Bureau, the previous record for most games on a single day in which every home team won was 12, set on May 23, 1914. There were three major leagues back then, and on that day, home teams won in the National (four games), American (four) and Federal (four) leagues.

"Without saying, it's more difficult on the road," said manager Bruce Bochy of the World Series championGiants. "There's got to be a slight advantage to playing at home, and I think yourgood teams play well at home, they win at home."

Seven home teams trailed at one point during their games, and four -- Seattle, Cleveland, Miami and Minnesota -- won in their final at-bat.

Four visiting teams got shut out:Atlanta at Tampa Bay; Colorado by the Mets; the Angels against the White Sox; and the Nationalsat Dodger Stadium.

Arizona and Tampa Bay joined the majors as expansion franchises in 1998, bringing the total to 30 teams.

In the last game to finish, Seattle squandered a three-run lead in the eighth inning against the Orioles before Austin Jackson's bases-loaded single down the right-field line won it for the Mariners at Safeco Field.

"I still didn't know if it was fair even when he called it," Jackson said. "I guess it hit the chalk and the rest is history."

Darren Rovell of ESPN.com and The Associated Press contributed to this report.