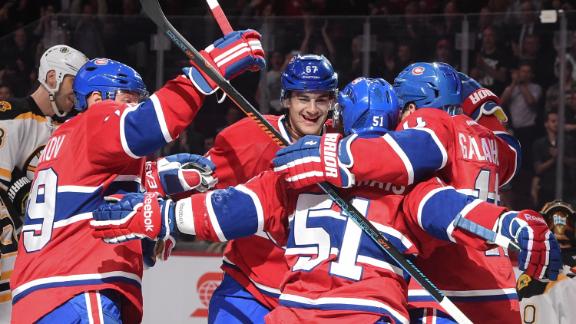 On Friday, the NHL fined Lucic $5,000. After Saturday's morning skate, Lucic addressed the situation, apologizing to the Bruins, Canadiens and fans of both teams.

"Obviously, I'm not proud of what I did there," Lucic said. "... I know (Canadiens fans) can get under your skin sometimes, but they are great fans. I apologize for my actions. I regret what I did."

With Boston trailing 5-4, Lucic was given a two-minute boarding penalty at 18:40 of the third period when he hit the Canadiens' Alexei Emelin. Lucic did not agree with the call and, as he entered the box, made a motion with his right hand and then mocked as if he was lifting the Stanley Cup.

After the Canadiens scored an empty-net, power-play goal, Lucic screamed something at the referee when he was leaving the penalty box and was ejected.

Lucic said it was the penalty call that sent him over the edge.

"It's inexcusable, the way I acted," Lucic said. "It was the call that was made, because I felt it did take away our opportunity of tying the game up.

Without talking about Emelin specifically, Lucic said he doesn't like when opponents turn away from hits in that manner.

Lucic also admitted he needs to do a better job of controlling his emotions.

"The Montreal crowd can get under your skin sometimes, but also they are great fans and they're what make the game fun," Lucic said. "It's what makes it great to be an athlete and a hockey player -- to play in an atmosphere like that and in a rivalry like that. I just gotta do a better job of controlling my emotions.

"Hopefully this will be the last time we're talking about controlling my emotions, not letting them get out of control. Another lesson learned."

"Everybody that knows Milan knows that he's a really good person," Julien said. "His teammates, coaching staff or any people he's come into contact with knows that he's a great person off the ice. I think his emotions sometimes on the ice have gotten the better of him and, to his defense, I think that penalty was probably a real tough call that maybe we don't really agree on.

"... The thing with Milan, it's hopefully having the ability to control those emotions to a point that it doesn't hurt the game, hurt the fans and hurts our hockey club. So, that's what he needs to work on."