Mike Scioscia wants to 'see where everything is' with Josh Hamilton 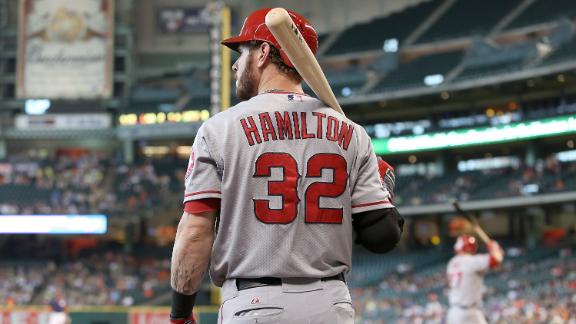 ARLINGTON, Texas -- Los Angeles Angels manager Mike Scioscia is hoping to see Josh Hamilton when the team travels later this week to Houston, where the slugger is rehabbing from right shoulder surgery after his self-reported relapse into substance abuse.


Scioscia said Monday that he would like to visit face-to-face with Hamilton to "see where everything is." While calling some aspects of the uncertain situation "very frustrating," the manager said the overwhelming feeling right now is concern for Hamilton.


"It just seems like as you try to get more clarity, it seems like it's getting foggier and foggier," Scioscia said. "So we'll see where this is and where this leads and just where Josh is. But first and foremost, we hope Josh is getting the help and support that he needs."


The Angels have a day off in Houston on Thursday before opening a three-game series against theAstroson Friday.


Angels owner Arte Moreno indicated last Friday before his team's home opener that Hamilton might not play for Los Angeles again. Hamilton is still owed $83 million through the 2017 season.


Major League Baseball will not discipline Hamilton for his self-reported relapse after a ruling earlier this month by an arbitrator appointed under MLB's joint drug program with the players' association.


The Angels reacted angrily to that decision before the season opened, with president John Carpino saying the ruling "defies logic."


Scioscia made his comments before the Angels opened a three-game series against the Texas Rangers, the team for which Hamilton was the 2010 AL MVP. Hamilton was an All-Star in each of his five seasons (2008-12) in Texas before going to the AL West rival in free agency with a $125 million, five-year deal.


In two injury-plagued seasons with the Angels, Hamilton has 31 homers and 123 RBIs. He turns 34 next month.


Hamilton never reported to spring training after the shoulder surgery in February. During the Angels' home-opening series over the weekend, his usual locker in the clubhouse was used by another player and merchandise bearing his name and number was pulled from souvenir shops at the stadium.


Scioscia gave no clear indication on where any meeting would be held, and if Hamilton would visit the Angels clubhouse while they are Houston.


"Everybody has been in touch with him, but we want to connect with him," Scioscia said. "Hopefully, we'll get a chance to see him."