Mike McCarthy says Packers' backs against wall after another loss 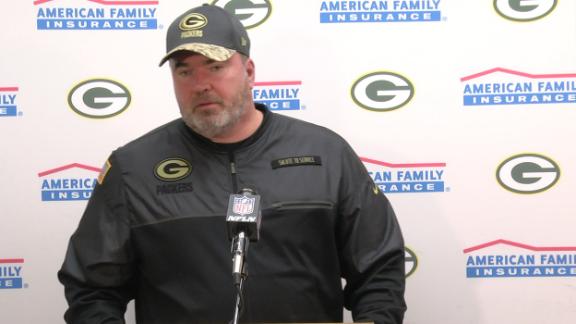 LANDOVER, Md. -- Reality hit the Green Bay Packers on Sunday night: Their season is on the brink after a 42-24 loss to the Washington Redskins at FedEx Field served as the Packers' fourth straight defeat.

With six games remaining, they are 4-6 and two games behind NFC North co-leaders Detroit and Minnesota.

Even if they stop the streak next Monday night in Philadelphia, the Packers will be two games behind in the division because the Lions and Vikings play Thursday in the annual Thanksgiving game in Detroit.

"We understand clearly what's in front of us, so six losses puts your ass against the wall," Packers coach Mike McCarthy said Sunday. "And that's where we are."

It's an unusual position for a McCarthy-coached team. The Packers' streak of seven playoff appearances is in jeopardy. They haven't had a losing season sinceAaron Rodgers' first year as the starting quarterback in 2008.

"Obviously coming in here, we knew we needed this game," McCarthy said. "This puts us at 4-6, and our backs are up against it. We've lost four in a row, lost some guys tonight to injury. It's important for us to get back home, hopefully assess where we are, move forward and get ready for Philadelphia. Just didn't play well enough."

It was another poor performance by the Packers' defense, which has allowed 30 or more points in four straight games -- the first time a Packers team has done that since 1953, according to Elias Sports Bureau research. In each of the past two games, coordinator Dom Capers' unit has given up 40-plus points.

Still, McCarthy insisted his team was "going to rally, stick together."

"We've got a good taste of the reaction of our football team to five losses, so clearly understand it's not going to get any better being at six losses," McCarthy said. "So that's part of the challenge in front of us, and I have all the confidence in the world. This is a great group of men, so I don't question that part of it. But we all need to perform better, and we did not get it done tonight."

McCarthy says Packers are 'against the wall'
Packers coach Mike McCarthy expresses his frustrations about his defense's performance against the Redskins and, with four consecutive losses, says Green Bay has put "their backs against the wall."