Mike Leach: Nothing special about SEC or its offensive schemes 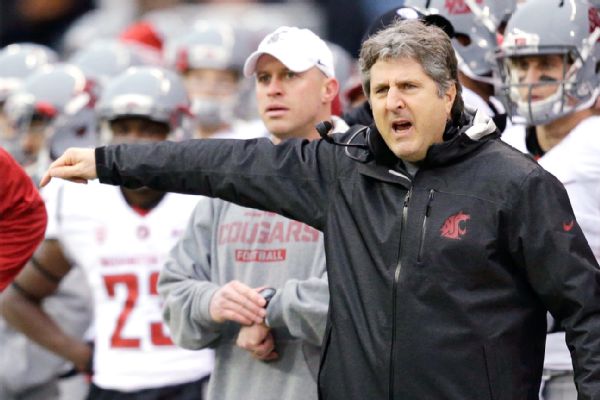 If Phil Longo fails to pan out as Ole Miss' offensive coordinator, Longo's mentor Mike Leach says it won't be because the SEC is too tough for the style of offense that he will run.

"How is it better? Somebody coaches better athletes, somehow they morph into something smarter, that's crazy. I mean, you still have problems, you still have 11 parts you can wiggle around to counter the other 11 parts."

A late-1990s visit with Leach spawned Longo's up-tempo scheme that produced eye-popping numbers at multiple small schools, most recently FCS-level Sam Houston State. But just because he has not done it at a major conference does not mean Longo's scheme can't work somewhere like the SEC, said Leach, now the head coach at Washington State.

Leach feels certain in that belief because he once directed an offense that lit up SEC scoreboards.

Leach joined longtime partner Hal Mumme as Kentucky's offensive coordinator and quarterbacks coach for the 1997 and 1998 seasons, and their wide-open passing attack was instantly effective.

Behind the combination of quarterback Tim Couch and wide receiver Craig Yeast, the 1998 Wildcats ranked 11th nationally in scoring offense (35.9 points per game), with Couch passing for 4,275 yards en route to becoming the first player selected in the 1999 NFL draft.

"First it becomes it won't work," Leach said. "Second, they basically say oh it's a system, suggesting that people who don't do it that way, who just run it up the middle, stick all your asses together so one hand grenade can kill everybody, that's the right way to do it. Since they do it the right way, they're OK with the fact they lost."

In Leach's two seasons at Kentucky, the Wildcats set six NCAA records, 41 SEC records and 116 Kentucky records -- a two-year period during which Kentucky went 12-11 largely because its defense was as ineffective as its offense was prolific.

Leach followed that run of success at Kentucky by directing an explosive Oklahoma offense in 1999 and then gaining national acclaim for his offensive mind as head coach at Texas Tech and Washington State.

At each stop, Leach countered skepticism over his offensive style with numbers that are impossible to argue against, and he implied his skeptics were loudest when he arrived in the SEC. Even in a rough-and-tumble, run-heavy league -- perhaps especially because of that mentality -- his offense produced.

And though he's nearly 20 years removed from coaching in the SEC, Leach says not much has changed about offensive philosophy within the conference.

"This is a great time to be in the SEC, everybody's got the same offense: run right, run left, play-action," Leach told the newspaper. "And they tease themselves and say we threw it four more times a game this year than we did last year."
Related topics:
sportsespnsecmike leachoffensecollege footballwashington state cougarsphil longoole miss rebels
Copyright © 2021 ESPN Internet Ventures. All rights reserved.
More Videos
From CNN Newsource affiliates
TOP STORIES