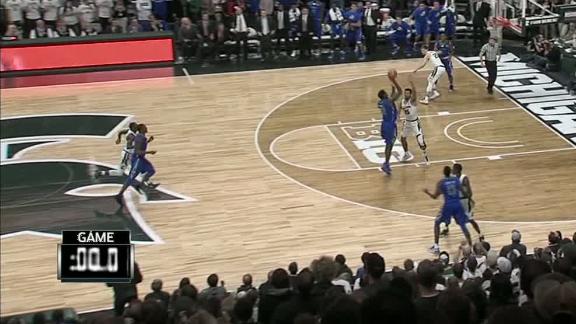 No. 13 Michigan State held off Florida Gulf Coast 78-77 on Sunday night when a game-ending timekeeping error led to a controversial finish.

With 1.6 seconds remaining, Florida Gulf Coast's Christian Terrell threw a long inbounds pass from underneath his own basket. But the clock incorrectly started when the pass was thrown rather than when Antravious Simmons caught the ball by the foul line at the other end of the court.

So as Simmons turned to try a game-winning shot, the buzzer sounded -- too early. Simmons missed his attempt, but FGCU players looked confused, and coach Joe Dooley sought an explanation.

Officials went to a video review as players and fans waited to find out whether the game was in fact over. After the delay, the play stood and Michigan State escaped.

In a statement issued to a pool reporter, official Bo Boroski said that "a timing error occurred with 1.6 seconds remaining on the game clock," and "a stopwatch was used to determine if any time should remain on the game clock."

The statement added: "It was determined the ball was caught and released in 1.3 seconds, meaning if the shot would have gone in, it would have counted. After the miss there was no time remaining in the game, therefore ending the game. By rule the possession can not be replayed. Period."

A source told ESPN's Jeff Goodman it was referee Lewis Garrison -- not the clock operator -- who started the clock early on the final play. Typically, it is the responsibility of the referee inbounding the ball to start the clock.

After the game, Dooley said he understood the ruling.

Big Ten spokesman Brett McWethy told ESPN that the conference is reviewing the situation and won't issue a statement until the process is officially complete.

Eron Harrishad 31 points and Miles Bridges added 13 points for the Spartans (2-2), who shot a season-best 51 percent from the floor. They hit 52.9 percent of their attempts from beyond the 3-point line but struggled at the free throw line (57.6 percent).

The Eagles shot 46 percent overall and 47.1 percent from the foul line. They outrebounded Michigan State 41-29.