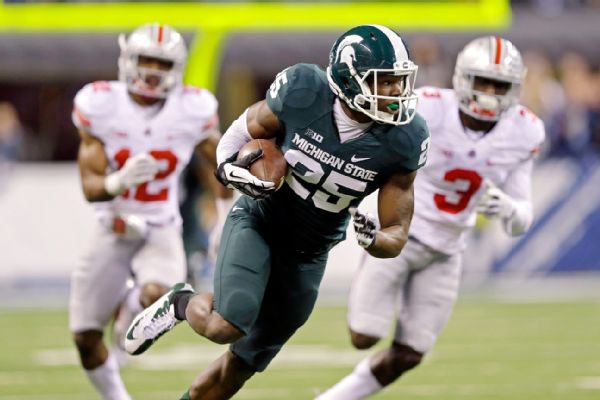 Michigan State expelled former football player Keith Mumphery in the summer of 2016 after the current Houston Texans wide receiver was investigated for an alleged sexual assault.

A police report about the incident, first obtained by the Detroit Free Press, says a woman accused Mumphery of raping her in March 2015 several months after they met on the dating app Tinder. Mumphery told police that the incident began with the woman seducing him in her dorm room on the night in question. The woman disagreed with his account.

Police requested an arrest warrant for third-degree criminal sexual conduct. The county prosecutor decided not to press charges, citing a lack of evidence and saying they were unable to get in contact with Mumphery's accuser.

This incident predates two other sexual assault allegations involving the Michigan State football team that have come to light so far this year. Freshman Auston Robertson was charged with third-degree criminal sexual conduct in April for an alleged rape that occurred earlier that month. Robertson was dismissed from the team the same day.

The university's police department requested four arrest warrants in relation to the January incident three months ago -- three of the warrants are for sexual crimes and the fourth is for an alleged obstruction during the investigation. Ingham County prosecutor Carol Siemon, who was not in the same position when Mumphery's incident occurred, has yet to make a decision on whether to charge anyone with crimes in that case.

Mumphery received his undergraduate degree in 2014 and was drafted by the Texans a little more than a month after the sexual assault accusation in 2015. He was notified in June 2016 that he had violated the university's relationship violence and sexual misconduct policy, according to police documents.

The letter, which was sent by the university's vice president of student affairs and service, said Mumphery was not allowed to re-enroll at Michigan State to complete the work he started on his master's degree and that he was banned from visiting any school facilities until the end of 2018.

The university hired the Jones Day law firm earlier this year to conduct an independent review of how the football program handled the allegations from the January incident. A school spokesman said Wednesday that the firm is not reviewing past cases like Mumphery's as part of its probe.