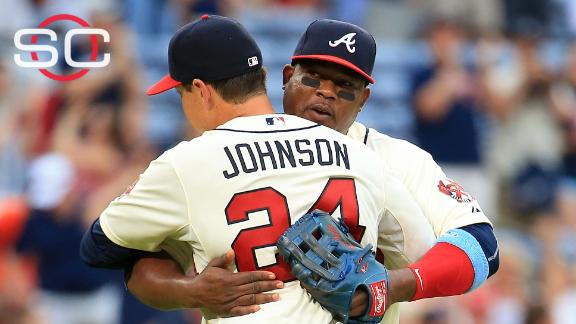 Uribe, who primarily has played third base in recent seasons, is hitting a combined .272 with eight homers and 23 RBIs with the Braves and Los Angeles Dodgersthis season. Uribe, 36, is earning $6.5 million in the final year of his contract.

Johnson, 33, is hitting .275 with nine homers and 34 RBIs. He has appeared at first, second and third base and both corner outfield positions this season. He is earning $1.5 million.

Along with Uribe and Johnson, the Braves are sending cash to the Mets to offset some of the remaining $3.15 million owed to the traded players.

"I feel very good because I got traded to another team that is a contender,'' Uribe said through an interpreter. "I would have felt bad if I got released or sent home, so I know that I'm going to go to a good team and have the chance to be in the playoffs."

Braves manager Fredi Gonzalez was complimentary of Uribe's quick adjustment to the clubhouse after an early-season trade from theDodgers. Gonzalez mentioned how Johnson's presence would accordingly be missed by Atlanta.

"You're getting ready to lose two guys that are really pretty good guys on our club," Gonzalez said. "Uribe's only been here about two months, but he fit in right away with these guys, and you're going to miss that and Kelly's professionalism."

Johnson had found his rhythm at the plate in July and is hoping the trade won't disrupt his hitting momentum.

"You find a good routine, and when it's working, it's hard to think about getting out of that," said Johnson, who was surprised to be traded to a division rival. "Now the toughest thing will be finding that routine there."

The Mets sent right-handers John Gant and Rob Whalen to the Braves.

New York has been looking to bolster its anemic offense, with third baseman David Wright at least a month away from returning from spinal stenosis and left fielder Michael Cuddyernow on the disabled list with a bone bruise below his left kneecap.

The Mets entered Friday night's game against the Dodgers ranked last in the majors in batting average at .233 and ahead of only the Chicago White Sox in runs scored.

Uribe's addition could push Daniel Murphy back to second base and return Wilmer Flores to shortstop, with Ruben Tejada becoming a backup player.