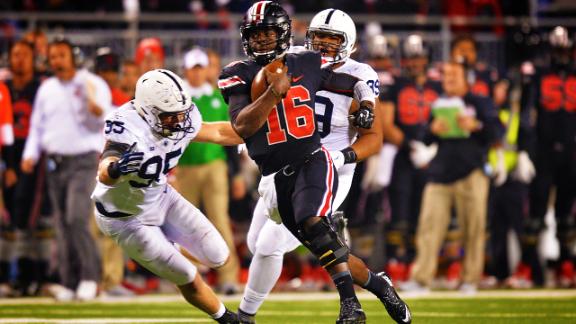 The American Athletic Conference wants to be considered closer in quality to the Power 5 conferences than it is to its fellow Group of 5 leagues.

That claim is backed up by the results this season.

The Utes and LSU Tigers each edged ahead one spot after home victories Saturday.

Michigan State stayed at No. 7 after its stunning last-minute winagainst Michigan, and Alabama is No. 8 after handing Texas A&M its first loss.

Memphis (6-0) had the big upset of the weekend, against Ole Miss. The Tigers'37-24 victory vaulted them into the rankings at No 18.

"It's one of the biggest wins we've had. It may be the most important based on where we are now," American commissioner Mike Aresco said Sunday. "UCF's big win over Baylor [in the 2014 Fiesta Bowl] was really important because it gave us some instant credibility that year."

Memphis has been ranked two other times: one week during the 2004 season and in the final poll of last season. The Tigers were 25th both times.

"I'm really proud of our players, and it's a tribute to them that people have noticed how they have played to this point," Temple coach Matt Rhule said. "I am thrilled that we have been able to get off to a 6-0 start. But I'll repeat what I have said before, it's a long season, and I'll be happier if we can finish the year ranked among the best in the country."

The American has held its own against the Power 5 this season, going 7-11 with wins against Penn State, Miami and Louisville.The Mountain West, MAC, Sun Belt and Conference USA are a combined 9-73 against Power 5 teams.

Pittsburgh also joined the rankings at No. 25 after a 5-1 start under new coach Pat Narduzzi.The Panthers are ranked for the first time since the 2010 preseason poll.

UCLA, Northwestern and Boise State each took their second loss of the season and fell out of the rankings.

Aresco said he hopes coaching and a commitment from administrations that have been willing to invest in their football programs will help the American sustain success. The conference is stocked with coaches on the rise such as Rhule, Herman and Justin Fuente at Memphis, but keeping them around long-term could be tough.

For this season, the American is well positioned to earn the spot saved for the highest-ranked champion from the Group of 5 in the New Year's Six bowls, but Aresco is thinking bigger.

"We want to be considered for the playoff spot," he said. "We're not just content to be playing for a Group of 5 spot on New Year's Day."