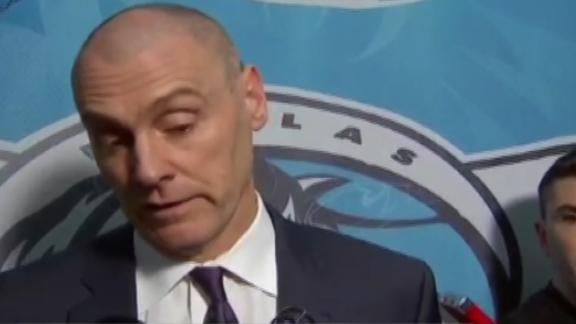 TORONTO -- Coach Rick Carlisle hasn't been able to figure out a solution to the Dallas Mavericks' maddening inconsistency, so he resorted to making a rather drastic threat.

Carlisle vowed to get rid of players if the Mavs continue to have frequent lapses of energy and effort.

Carlisle first made the comments in the Dallas locker room after the team's103-99 loss to the Toronto Raptorson Tuesday night, a game that was only close because the Mavs' reserves made a late run.

Carlisle repeated the threat for public consumption during his postgame news conference after calling Dallas' performance in the first half "embarrassing."

"Look, if it's going to be like that, these guys aren't going to be Mavericks very long," Carlisle said after his team fell to fifth place in the Western Conference with a 15-13 record. "I can promise you that."

The Mavs understood why Carlisle delivered such a harsh message behind closed doors. It's certainly not the first time this season he has been fired up after a poor effort and let his team know about it.

Several Mavs players seemed surprised, however, that Carlisle decided to publicly threaten to shake up the roster.

"Wow," small forward Chandler Parsons said, taking a few seconds to collect his thoughts after being read Carlisle's quote. "We've got to play harder. He's going to be here at least five more years. He just signed an extension. Nothing here is unconditional. We're paid to play hard and compete every single night. When nights like this happen, when we don't lay it all on the line, words are going to be said like that."

Added center Zaza Pachulia: "He's a coach trying to push the right buttons. He's been in the league for a long time and he's done great things -- winning seasons, championships. He knows what he's doing."

Dirk Nowitzki, the longtime face of the franchise whose no-trade clause guarantees he isn't going anywhere, opted not to share his thoughts on Carlisle's comments.

"I've got nothing to say about that," Nowitzki said. "We fought at the end and came up short. Hopefully, we'll have a better game tomorrow."

All of the Mavs agree they must figure out a way to prevent their energy from ebbing and flowing so much. The first step, Pachulia said, was for every player to look in the mirror and ask themselves what they can be doing better. Beyond that, nobody had any answers other than the obvious: Play harder.

It's not clear whether Carlisle's threat meant he planned to push for trades this season, or simply shake up the roster again this summer, which is becoming an annual tradition for the Mavs. Only five players on the roster have guaranteed salaries for next season with no team or player option.

The constant roster turnover has been part of Dallas' problem since the 2011 lockout, when owner Mark Cuban opted for financial flexibility instead of keeping the aging core of a championship team together. The Mavs have turned over more than half of their roster in every offseason since, with three starters among the eight newcomers this season.

Dallas has also had to deal with its two highest-paid players coming off serious injuries and difficult rehabs: Parsons, who had hybrid microfracture surgery on his right knee in May and can opt out of the final season of his three-year, $46 million deal this offseason; and shooting guard Wesley Matthews, to whom the Mavs gave a four-year, $70 million max deal this past summer despite him being months removed from rupturing his left Achilles tendon.

But the roster turnover and injury rehabs don't explain why the Mavs are failing consistently to do the simplest thing in sports: Play as hard as possible.

"I don't want to make any more excuses for this," Matthews said. "We've got to start being who the hell we are and who we want to be. That's what I take away from Coach's message."

Carlisle: 'If it's going to be like that, these guys won't be Mavericks long'
Mavericks coach Rick Carlisle reacts to his team's performance after losing to the Raptors.

Windhorst: Carlisle not serious about trade talks
Brian Windhorst says Rick Carlisle is trying to get his players to stop playing "average" basketball in his vow to change the team.