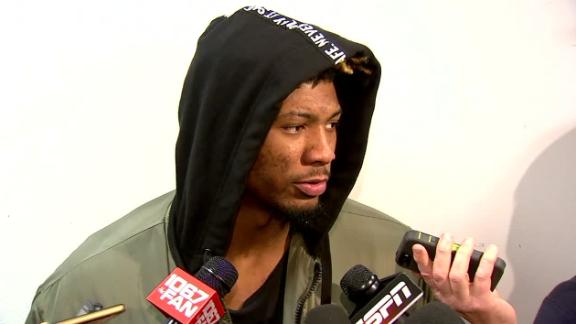 Celtics guard Marcus Smart had a brief-but-animated flare-up with assistant coaches on the Boston bench late in the fourth quarter of Tuesday night's 123-108 loss to the Wizards and was sent to the locker room before the end of the game.

Smart, who had played 17 of the first 20 minutes of the second half, subbed out with just under four minutes remaining and the Celtics trailing by 13. A little more than a minute later, he started to walk toward the scorer's table to check back in, but coach Brad Stevens immediately followed him. On the court, a turnover triggered the final TV timeout of the game.

Smart returned to the bench at that point and sat down in the huddle as if he was re-entering the game. Some of Boston's assistant coaches attempted to remove him, but Smart was shown on the television broadcast having a heated exchange with assistants Jerome Allen and Jamie Young, which included waving a towel in their direction as Stevens sat in front of the huddle. Smart finally relented and jogged to the locker room as teammate Amir Johnson followed.

"So he just wanted to go back in. And he had played 12 [consecutive] minutes or whatever, so he wasn't going to go back in," Stevens told reporters in Washington.

Pressed on why Smart appeared upset, Stevens added, "He wanted to go back in badly."

Smart addressed reporters after the game and chalked up the incident to frustrations for a Celtics team that lost its third straight game and has struggled mightily on the defensive end for much of the past month.

"Just coaches and players, they're real passionate about the game and hate losing and having different opinions about certain things in the game," Smart told reporters in Washington. "Of course, I wanted to go back in. Just like everybody else to play it out and give it everything they had and leave it on the court. We had different opinions on that."

Smart, starting in place of injured Avery Bradley, finished with 13 points on 4-of-13 shooting, five rebounds, four steals, and an assist. The Wizards backcourt of John Wall and Bradley Beal combined for 58 points and rarely met resistance trying to get to their spots.

After tempers between the Celtics and Wizards had escalated in recent meetings, the Wizards wore all black to Tuesday's game and dubbed it a funeral. Washington controlled the game from start to finish and left the Celtics frustrated with themselves.

Over the past month, the Celtics rank 29th in the NBA in defensive rating while allowing 112.1 points per 100 possessions. That's unfathomably bad for a team that finished tied for fourth in defensive rating last season. Boston is 9-5 in that span, relying on Isaiah Thomas' fourth-quarter magic to carry the team since he returned from a groin injury in mid-December.

Smart was asked if Boston has been a tough defensive team this season.

"No, we have not. And that's the problem," Smart said. "As a team, we have not. Everybody on this team has had moments to where we haven't lived up to par. Last year, we were the team where guys hated to play against. This year, everybody wants to play us because we're not doing everything that we used to do in the past on the defensive end."