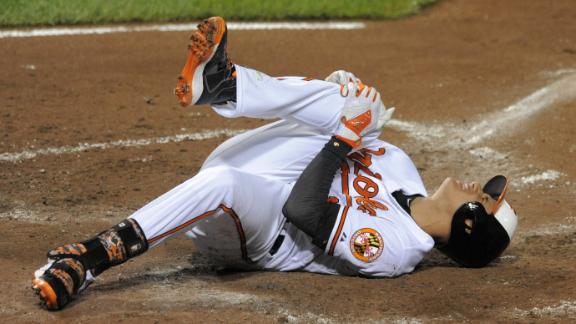 BALTIMORE -- Orioles third baseman Manny Machado has a right knee ligament sprain -- welcome news for a team contending for a berth in the AL playoffs.

The injury could land Machado on the 15-day disabled list, but it's not as serious as it looked on Monday night, when the third baseman crumpled in a heap at the plate after taking an awkward swing in a game against the New York Yankees.

Machado had to be helped off the field and had a pair of crutches resting against his locker when he talked to reporters.

The Orioles spent much of Tuesday waiting out a steady rain and awaiting the results of Machado's MRI.

One issue was resolved by late afternoon: Baltimore's game against the Yankees was postponed and will be made up as part of a split-admission doubleheader on Sept. 12.

Before the result of Machado's MRI become available, Orioles manager Buck Showalter was asked if either player was a candidate for the disabled list.

"I'm not going to handicap it," he replied. "I don't know yet, but just because someone goes on the DL doesn't mean that he's not going to play again this year, or he's going to have surgery or this and that. Sometimes that does clean it up. Right now we've got rooms for both of them in Chicago and Cleveland."

The Orioles have a scheduled off day Thursday before opening a three-game series in Cleveland, followed by three games apiece against the White Sox and Cubs.

Showalter said Machado appeared hopeful of avoiding the disabled list for a second time this season. The 2013 All-Star began the season on the DL while recovering from offseason surgery on his left knee.

"He was optimistic (Monday) night. I wouldn't let him be anything else," Showalter said. "Unfortunately, he's had a little experience with it, so he knows the difference. He's joking around and speaking very positively."