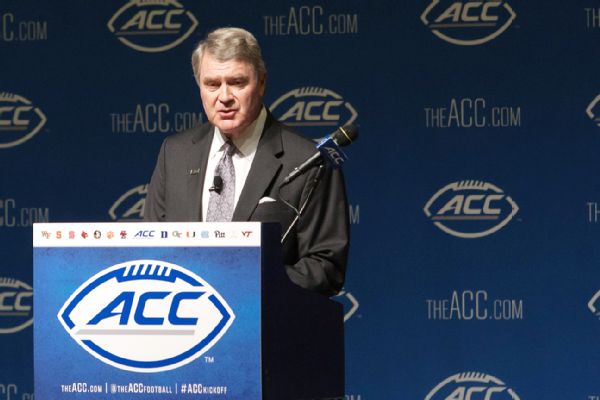 The $25,000 penalty is the maximum fine allowed under ACC bylaws. Earlier this week, both schools admitted that assistants at their respective programs received specific plays from Elrod, who has since been fired from his duties with IMG and barred from Wake Forest.

Louisville suspended offensive coordinator Lonnie Galloway for the Buffalo Wild Wings Bowl against LSU because he accepted the plays before the two teams played this past November. Virginia Tech did not name the assistant who accepted plays from Elrod, saying only he no longer worked at the school.

The ACC added it was satisfied with Galloway's suspension.

In all, three schools were involved in the scandal: Virginia Tech (2014), Louisville (2016) and Army (2014, 2016). Army put out a statement Saturday saying a U.S. Army official would conduct an investigation into the allegations.

"I am deeply disturbed something like this would occur, and regardless of the degree of involvement, the protection of the competitive integrity of our games is fundamental to any athletic contest," ACC Commissioner John Swofford said in a statement. "Sportsmanship and ethical values are at the core of competitive integrity and in these instances, those were missing. The expectation, regardless of the sport, is that any athletics department staff members would immediately communicate with their supervisor if they are approached by someone from another institution with proprietary information."

Wake Forest's internal investigation began after a sheet featuring its plays was discovered during a Nov. 11 walk-through at Papa John's Cardinal Stadium, one day before the Demon Deacons played Louisville there.

Emails, text and phone records showed that Elrod provided or attempted to provide confidential game plan information dating back to 2014.

Elrod played at Wake Forest and was an assistant there under former coach Jim Grobe. When Dave Clawson was hired for the 2014 season, he decided not to retain Elrod, who transitioned to the radio booth and was given complete access to Wake Forest practices and facilities. His attorney has yet to comment on the investigation.